After more than a decade of racing in NASCAR, defending Cup champion Joey Logano is used to having his photo taken.

But the Connecticut native admits he’s still taken aback at times when he sees himself on a trading card, such as in the new Panini America product, Donruss Racing, which features top current and retired NASCAR drivers.

Not only is Logano featured on one of the set’s cards, he’s also pictured on the cover of a full boxed set.

“As a kid, I remember collecting trading cards,” Logano told NBC Sports. “It’s kind of a dream come true to be on them. That’s like every kid’s dream when you’re collecting them. I used to have a pile full.” 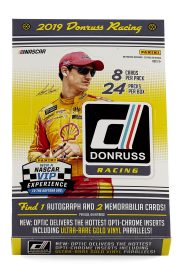 But Logano still isn’t completely comfortable when he sees himself on a trading card.

“I guess I still look at myself as a normal Joe, so any time you see your face on something, whether you’re randomly doing something and at your local Target or Walmart and look over and see a Panini card or a Donruss card that has your face on it, it’s really neat and kind of weird too,” Logano said.

Logano has even walked into stores where customers may see one of his trading cards or the new box set, then look up at him and do a double-take.

“You get the people that look at you and then look back at (the card) and try to figure it out,” Logano said with a laugh.

When he was a kid, be it a baseball card or racing card, Logano used to trade the little pieces of cardboard with his friends. These days, now that he’s married and a father, that idea has kind of faded into the background – until he was asked if he would ever trade his own card from today for another driver’s card.

“I guess I should think about that, it’s not a bad idea,” he said with another laugh. “It’s not uncommon for drivers to trade memorabilia with each other and things like that throughout the year, so that would be something pretty cool to do actually.”