While many fans and teams were uncertain how the new Ford Mustang would perform upon its introduction to the Cup Series this season, Las Vegas winner Joey Logano, crew chief Todd Gordon and the rest of Team Penske embraced the change and newness.

“I think any time there’s a rule change like we have right now in NASCAR (the new aero package), it presents an opportunity to figure things out first,” Logano said to NBC Sports on Tuesday as part of a Panini/Donruss NASCAR trading cards media tour. “Like I said after (Sunday’s race at Las Vegas), we sure don’t have it figured out yet, but I’d say we’re doing pretty good with the speed we’re developing.

“You just have to figure it out a little better than the next guy, right? That’s the most important piece. I feel like we’ve made some good gains over the last few weeks as far as the racing side. Our qualifying efforts have been weak, so we have to make some more gains on that front. But I’m pretty proud of the effort of everyone to figure out the new rules package. As we keep going, the drivers are going to get better, the teams are going to get better and the racing is going to change. We just have to keep developing as fast as possible to stay ahead of it.” 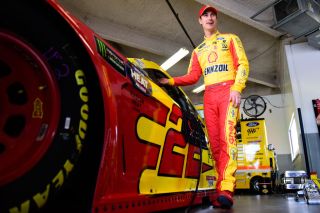 But that’s not been the case with Ford and the Mustang. Leaving Las Vegas, five Mustangs and their drivers are in the top 11 in the Cup standings.

“First off, I think Ford’s done a great job collaborating with the race teams and everybody has made decisions together to make the best race car they can when they were designing the Mustang for NASCAR,” said Logano, the reigning Cup champion. “The other piece that is equally as big is the timing of it.

Now that Logano and teammate Brad Keselowski have secured spots in the playoffs by virtue of their respective wins at Las Vegas and Atlanta, their teams can not only be more aggressive between now and the start of the playoffs in September but can also help their teammates – Ryan Blaney and Paul Menard of Wood Brothers Racing – to get on track and potentially get wins themselves.

“I think any time you have your teammate winning, it generates momentum within the race shop, which is good, and drives you to be that guy where everybody wants to be the top dog and you’re always fighting for that spot,” Logano said. “But we also work together real well to make sure we’re winning while we’re doing that.

“As far as the 12 car of Blaney, they’ve had a lot of speed but they just haven’t had things go their way in the first couple of races. So it’s early. I don’t think they have anything to worry about. They’ve got fast race cars, Blaney is a great driver. I think they’re going to be fine.

“As far as the 21 car (with Menard), they’ve been improving over the last year. With last year being their first year together with Paul and (crew chief Greg Erwin) at the Wood Brothers, it’s been a learning curve to figure things out. I can see them making gains as well throughout this year.

“As long as everyone is running good by the time when it matters the most, during the playoff time, that’s a big deal for (team owner Roger Penske). It’s nice to have two of them in, that’s great, we can race aggressive now, whether it’s pit strategy or the way I drive the car, we can make big moves, so that’s great. But at the same time, we still have to be concerned that the rest of our cars make the playoffs.”