Restrictor-plate racing and crashes have always been tied together, but last weekend’s Daytona 500 saw something that has rarely been seen.

The 36 cars listed in NASCAR’s race report as involved in an accident is believed to be among the most in the event’s 61-year history. Racing Insights, which provides statistics to NBC Sports, listed 37 of 40 cars in accidents — Racing Insights included Corey LaJoie’s car after a tire damaged the front of that car.

The Daytona 500 has been tough on car owners the past three years. An average 32.7 cars (out of a starting field of 40) have been involved in accidents in the race. It is the largest three-year average going back to at least 1980.

Last weekend’s Daytona 500 concluded one of the costliest Daytona Speedweeks for Cup car owners. A total of 60 cars were listed as involved in accidents in practice, the Clash, the qualifying races and the Daytona 500. Since 2010, only one year has seen more Cup cars in crashes during Speedweeks — 2015 when 61 cars were involved.

Here’s a look at the number of Cup cars listed in a crash during Daytona Speedweeks in recent years: 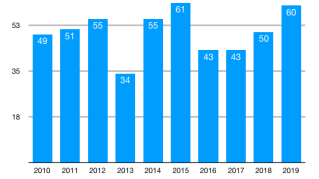 Even with all the Cup cars in crashes — and 26 trucks in crashes in that race — this year’s Speedweeks saw a decline in the total number of vehicles in incidents. The total for Cup, Xfinity and the Gander Outdoors Truck Series for all of Speedweeks was 88 vehicles. That is down 9.3 percent from last year and 15.4 percent from 2017.

Here is how many vehicles in the Cup, Xfinity and Truck Series were listed in a crash throughout Daytona Speedweeks in recent years: 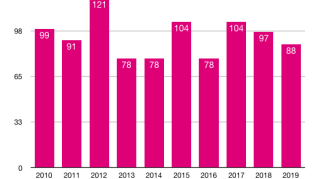 Kevin Harvick has suggested doing away with the Clash, the exhibition race held a week before the Daytona 500. Seventeen of the 20 cars in that race were involved in a late crash. That came a day after a four-car crash in practice. Eliminating that race could be one way to help teams save money.

2. What to expect at Atlanta?

A sampling of what some drivers anticipate this weekend at Atlanta Motor Speedway, which features the debut of NASCAR’s new aero package that includes limiting the engines to 550 horsepower at tracks that are 1.33 miles and larger:

Austin Dillon: “I think this year restarts are probably going to be more fire than usual. It’ll be more amped up. I feel like you’ll see guys spread from top to bottom trying to make time, and you’re hoping that your line moves forward. So, it’ll be impressive, I think. Once you get to Atlanta, it’ll be a good show and then Vegas will really be wild on these restarts.”

Chase Elliott: “I really don’t know what to expect.”

Jimmie Johnson: “I think when handling comes into play, you’re going to need clean air (at Atlanta). When you’re at Michigan and the tires don’t wear out, you can be in dirty air and it doesn’t affect the car. Same thing I think for Vegas. When you get to Fontana, Atlanta, you’ll have a short window of time to really dice it up, but you need clean air to plant your car on the ground.”

Kyle Larson: “I was excited talking with Erik Jones the other day. He said the top was really fast at Atlanta. I think that there will be a lot of places where now you’ll be able to run the top, but, then again, I think that hurts me because everybody will be able to run the top. I feel that as we’ve taken spoiler away from the cars it’s just made it harder for other people, so it kind of opens up a lane for me up there. So, I think the tracks where I’ve had my own line up around the wall, I think it will be easier for other people to run up there. But it could benefit me more than others. We’ll just have to wait and see.”

Martin Truex Jr.: “When we go to Atlanta, it’s going to look a lot different than it did at Charlotte. When we go to California, it’s going to look a lot different. It’s going to be certain tracks it looks one way and certain tracks where it looks another way. There’s no way to make the same exact racing at all the different tracks because they’re just so different. We’ll have to wait and see I think and wait a little while to kind of make a judgment on this thing and what it looks like and whether we’re happy with it or not.”

One of the beliefs from NASCAR has been that even with the new rules package, the best teams still will be expected to race at the front.

If that’s the case, there will be six drivers to watch Sunday at Atlanta — since they were the only drivers to win on a 1.5-mile track last season.

Those six drivers have combined to win the last 17 races on 1.5-mile tracks, dating back to Austin Dillon’s 2017 Coca-Cola 600 win at Charlotte Motor Speedway.

As a 15-year-old, he won a record four consecutive ARCA poles and won his first race in his fourth series start last year. He will compete in Truck races at Iowa Speedway (June 15), Gateway (June 28), Bristol (Aug. 15) and Phoenix (Nov. 7).

KBM is a key step in the development of several Toyota Racing Development drivers.

Christian Eckes, 18, started on the pole for the Daytona Truck race but was eliminated by a crash and finished 22nd. He’ll drive six more Truck races for KBM: Gateway (June 22), Pocono (July 27), Las Vegas (Sept. 13), Martinsville (Oct. 26) and two races to be announced.

Kyle Busch will make his 500th career Cup start this weekend at Atlanta Motor Speedway. Only twice in the sport’s history has a driver won in their 500th start. Richard Petty did it in 1970 and Matt Kenseth accomplished the feat in 2013.