Fans are invited to take part in a special promotion that will see them design and have their name emblazoned upon Bubba Wallace No. 43 Chevrolet for the March 17 Cup race at Auto Club Speedway in Fontana, California.

Fans can submit designs for the car Wallace will drive in the race. Once the final design is selected, fans will have their names on the car. A diecast model will also be produced with fan’s names on it and then sent to all who participate in the promotion.

The promotion is tied in with a one-race sponsorship for the event from Plan B Sales and Marketing. Fans can go to www.PlanBSales.com for instructions on how to participate, according to a Richard Petty Motorsports media release. 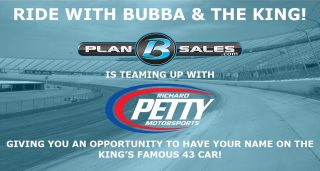 “This program is something cool and it’s easy to do. It’s an easy way to get a cool No. 43 diecast with your name on it and watch it race at California.”

Plan B Sales and Marketing is a leading producer of diecast models in motorsports.

“We have been with Bubba since the beginning of his career,” Plan B co-owner Brent Powell said. “When he embarked on his trek to success after racing in the NASCAR Xfinity Series, Bubba actually signed his first diecast in our parking lot.

“We’ve maintained a relationship with him throughout the years and have always enjoyed having him as an ambassador. He is a loyal supporter of our brand and products.”

This promotion is similar to Dale Earnhardt Jr.‘s last Mountain Dew Cup car at Talladega Superspeedway in 2017, when fan’s names were placed on his Chevrolet.

“Fans play a pivotal role in our company and in the sport as a whole,”  Powell said. “That notion drove us to make sure this partnership interacted with them – whether it be through the paint scheme design, or the addition of their names on the car at the event at Auto Club Speedway.”