2018 was a really good year for Hendrick Motorsports — on the diecast market.

Elliott, who scored Hendrick’s only three Cups wins and was voted NASCAR’s most popular driver, tops the list with his No. 9 NAPA Chevrolet.

All three of Elliott’s race win diecasts are on the list, with his first career Cup win at Watkins Glen coming in at No. 2.

Hendrick is represented by all four of its drivers on the list with Jimmie Johnson, William Byron and Alex Bowman each having one diecast in the top 10.

Kyle Larson‘s No. 42 Credit One Chevrolet is eighth and Kevin Harvick‘s No. 4 Busch Beer Ford is 10th. 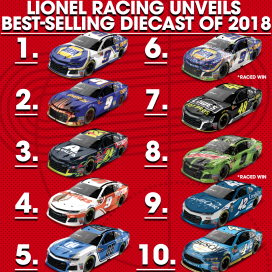