NASCAR announced Friday that it has submitted a non-binding offer to acquire all outstanding shares of Class A common stock and Class B common stock of International Speedway Corp. not already owned by the controlling shareholders of NASCAR. The intention is to combine ISC and NASCAR as one privately run group of companies led by the France family.

“In a highly competitive sports and entertainment landscape, a more unified strategic approach is important to our future growth,” said Jim France, Chairman and Chief Executive Officer, NASCAR, who also is ISC’s Chairman of the Board. “We believe the industry requires structural changes to best position the sport for long-term success and this offer represents a positive step forward in that direction.”

The France Family Group controlled approximately 74.2 percent of the combined voting power of the outstanding stock of the company as of Aug. 31.

NASCAR has retained Goldman Sachs & Co. LLC as its financial advisor and Baker Botts as its legal counsel in connection with the negotiation and consummation of a mutually acceptable transaction, and BDT & Company is serving as financial advisor to the France family.

NASCAR’s offer will be reviewed by a special committee of independent ISC board members advised by independent legal and financial advisors. In the interim, NASCAR and ISC will continue to operates as independent entities.

“My initial reaction, I think that could eventually lead to flexibility for a schedule,” seven-time Cup champion Jimmie Johnson said of NASCAR’s bid. “Do you shorten the schedule? There’re all these questions. And I think that unity and that collaboration, or those two entities combined would be a step in that direction. It would hopefully open those doors to let those conversations really happen and progress be made. That’s pure speculation, of course, on my part, but that’s where my first thoughts go.” 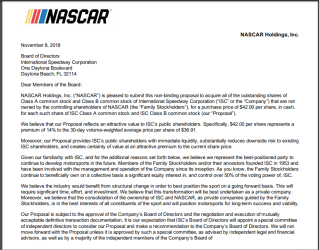 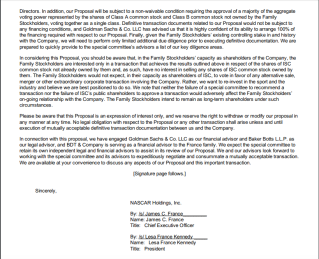 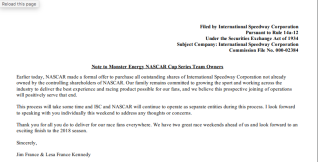