Custer passed Tyler Reddick on the last lap to score the win.

Christopher Bell placed 32nd after he wrecked from contact with Cindric on Lap 134. It is his second straight DNF.

With his win, Custer is the first driver to secure a spot in the championship four.

The top four ahead of next weekend’s elimination race at ISM Raceway are Reddick (+20 above cutline), Elliott Sadler (+13) and Daniel Hemric (+12).

With one race until the championship round, the two winningest series regulars this year are below the cutline.

Justin Allgaier, who has five wins, is fifth on the playoff grid, 12 points below the cutoff. 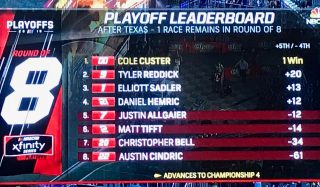