There are just three races left to decide who will compete for the Cup title.

On NASCAR America, Steve Letarte and Jeff Burton discussed Martin Truex Jr.‘s chances of getting a shot to repeat as champion.

Letarte believes Furniture Row Racing is hurt by the fact that it will close down at the end of the season.

“The way I look at it is there’s going to be four drivers that race for a championship in Miami and two heavyweights are already in,” said Letarte, referring to Kyle Busch and Kevin Harvick. “I don’t think Martin Truex makes it. I just don’t. I think that they’ve done a great job of trying to protect their team from the news, but the simple fact is we are four weeks from a championship and we are four weeks from an entire shop of people losing their job. That’s fact. That’s life. That’s what they’re trying to deal with out there in Colorado.”

Burton believe’s “no one’s a lock” for the championship four but admits it would “take special circumstances” for Harvick and Busch to not make it. He also thinks Truex is in a better position to advance compared to those he’s fighting for the final two spots in Miami.

“Who is trying to take him out of the Big 3?” Burton asked. “I haven’t seen it from (Clint) Bowyer. (Aric) Almirola’s been running pretty well lately. But you’re going to have to be better than just run with him. He has more points than you have.”

Watch the above video for more. Below is the playoff standings entering Martinsville and the Round of 8. 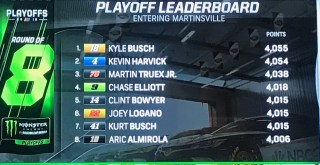