The Roval has come and gone and through the smoke emerges the first Xfinity Series playoff elimination race.

The series heads to Dover International Speedway for Saturday’s Bar Harbor 200 (3 p.m. ET on NBCSN) and so far only one driver, Christopher Bell, has secured a spot in the second round after part-time driver Chase Briscoe won at the Roval.

The 200-lap race will whittle the playoff field from 12 to eight drivers.

Justin Allgaier, Ross Chastain and Austin Cindric are three drivers who are in precarious positions going into Dover.

The JR Motorsports driver entered the playoffs as one of the favorites to win the title. Behind a career-best five wins, he was the No. 1 seed and 36 points above the cutline.

Two races can make all the difference.

Allgaier opened the playoffs by wrecking out at Richmond with 26 laps left. At the Roval, Allgaier finished 15th after pitting during the last caution for repairs to his No. 7 Chevrolet. The repairs fixed leftover damage from an incident on Lap 28 when he was spun by Cindric while exiting pit road and then hit by Ryan Sieg.

After 14 straight top 10s to end the regular season, Allgaier has finished 15th or worse in both playoff races. He enters Dover 11 points above the cutline, tied with teammate Elliott Sadler.

Allgaier, who won at Dover in the spring, doesn’t feel secure ahead of the elimination race.

“Even a guy like Christopher Bell, whose won a race and is locked in, you still don’t go into these races feeling safe,” Allgaier said. “You want to go run good, you don’t want to get crashed. Try to gain as many points as you can. That’s what we tried to do today, figure out how to get as many points as we can. Dover’s been good for us. It’s a great race track for us. All in all, anything can happen. We can miss this first round. You never can say never.”

Allgaier has placed in the top five in four of his last five Dover starts. He is the only playoff driver with a win at Dover.

The JD Motorsports driver “wouldn’t change anything” about his Roval experience.

After qualifying 16th, Chastain intentionally fell back to the rear, treating the road course like a restrictor-plate race and opting to avoid the potential chaos.

He didn’t finish in the top 10 in either stage but survived to place 12th.

“To come away with a 12th and still have a shot (at advancing) and not crash, we can run this car again next year. It’s a job well done,” Chastain said. “We minimized the damage today and that’s what we needed to do.”

Chastain has finished 12th or better in six of his last seven races.

After winning at Las Vegas with Chip Ganassi Racing to qualify for the playoffs, Chastain finished second at Richmond before entering the Roval.

He heads to Dover as the last driver above the cutline with a nine-point advantage over Cindric.

While Chastain and Cindric have each earned 68 points through the first two playoff races, Chastain has the advantage of owning 10 playoff points to Cindric’s one.

What is Chastain’s strategy for Dover, a track where his best finish in seven starts is 12th twice?

“We go to win Dover,” Chastain said. “That’s all we can do. We run as good as we can, no laying back there. There’s going to be crashes there too. For Dover, you just have to go and run as fast as you can and out race these guys. That’s one thing the 4 team can do. Our race craft has really come a long way. Just minimize our mistakes and we’ll be OK.”

Even though he finished third, the Team Penske driver had a fairly miserable day on the Roval.

After starting from the pole, Cindric led the first 13 laps. He then spun in Turn 6 while facing pressure from Daniel Hemric in second. Cindric fell to fourth and was never the same.

Then there was the incident with Allgaier in Turn 3 as Allgaier merged into race traffic in front of Cindric.

Cindric took the blame, but doesn’t expect any retaliation from Allgaier.

“Justin and I talked about it on pit road,” Cindric said after the race. “He wasn’t happy, but it didn’t seem like something he wanted to fight about or anything. He said, ‘That was poor racing and we can do better than that’ and I said ‘Yeah, I completely agree.’ I’m sure that doesn’t help him super great in points.”

Cindric enters Dover the first driver outside the top eight. While nine points behind Chastain, he is 15 points ahead of Ryan Truex in 10th.

“I wish I would have had a better run at (Richmond) last weekend (finished 13th), I wish I would have been able to capitalize more today,” Cindric said after the race. “That’s all behind me.  … We had a really good run at Dover last time we were there (finished ninth). I don’t expect us to be anything but where we need to be. I don’t see this as a must win. Obviously you want to run as well as you can, but stage points are so critical in this deal. … There’s some mistakes that need to be minimized.” 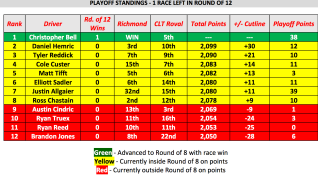