CONCORD, N.C. — With the goal of making the racing better and giving drivers more chances to show off their abilities, NASCAR announced a 2019 Cup rules package that features a tapered spacer to control the engines instead of a restrictor plate.

“Simply put it’s racing less on the wind tunnel and more on the track,” said Steve O’Donnell, chief racing development officer for NASCAR of the higher downforce package that will be used next season.

“It’s taking a lot of what we want to see and putting it back in the drivers’ hands.”

Teams were given these rules Monday night.

O’Donnell said the new package will give drivers the ability to make more moves in a race.

“You’ve got to really think about different moves and you will the ability to make those passes,” he said. “Right now, unless I’m missing something in terms of what we’re watching … I don’t see the option as much going into the corner at the speed that we would have in our new package.”

No driver has yet to drive this package. It will be used at Wednesday’s Goodyear tire test at Phoenix. Denny Hamlin, Kyle Larson, Ricky Stenhouse Jr. and Paul Menard.

The 750 horsepower package will be tested at Goodyear tests at Charlotte, Atlanta and Las Vegas.

“Let me dispel the myth that NASCAR is interested in pack racing everywhere,” O’Donnell said. “It’s taking the best of short tracks and the best of superspeedways.

“The best drivers and best teams are still going to win the race.”

O’Donnell said by backing down the speeds, it also will allow Goodyear to develop a tire that falls off more, putting more into the drivers’ hands.

With some events having less horsepower, fuel mileage will be different. Scott Miller, senior vice president of competition, stated that for those races, NASCAR will require teams to block three gallons of the fuel cell so that the number of laps run between full fuel runs should be the same. 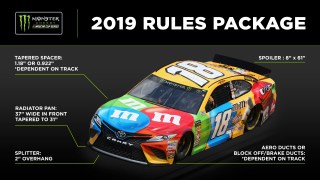 New challenges and opportunities are ahead for all of us drivers and teams, I look forward to embracing it personally. As long as the best still rise to the top, I support it. https://t.co/sNl7F8mtx9

Similar to the 2018 All-Star package that provided some great action and side by side racing…. With a little extra HP! 👍👍 https://t.co/nBa15QHIsw