No one knows what to expect this week at the Charlotte Roval. The Bank of America Roval 400 is not only the first race on the Charlotte road course, it is the first of its type for today’s NASCAR driver.

In 1954, NASCAR ran a race on a temporary road course at the Linden (New Jersey) airport. A handful of other races were run on airport tarmacs, but that is the closest they have come to running a street course race.

The Charlotte Roval is more closely aligned with a street course, as Marty Snider explained to the NASCAR America crew on Tuesday.

“You’ll notice between 5 and 6, there’s walls on both sides of the race track,” Snider said. “This truly could be NASCAR’s first-ever quote/unquote street race.”

Charlotte is truly a hybrid. Utilizing most of the oval and an infield segment, the track lays out at 2.28-miles in length. Since it is all contained inside the oval, sight lines for fans are going to be unimpeded.

“The fans are going to have an awesome show this weekend,” Snider said. “They’re going to be on top of the action. They can see the entire road course and pit road, so that’s going to be very cool.”

It didn’t take long for him to identify one.

“The Turn 1 wall … that has been reinforced. … There’s a tire barrier, a SAFER barrier and a concrete barrier. (track officials have) promised me there is no way that thing is going to move during the race,” Snider said.

And if the turn was not treacherous enough during a standard lap, it is going to be much more dangerous coming off a restart.

“The restarts here at the Roval are actually going to be on the oval part of the track,” Snider continued. “So when you run a normal lap here, you run through a frontstretch chicane. You won’t do that when you restart. So crew chiefs tell me they are going to enter Turn 1 … about 15 to 30 miles per hour faster than they would on a normal lap.”

Creating the track experience was a collaborative event. CMS reconfigured the track multiple times based on driver feedback. With the race in sight, they wanted to make one more change and add the sticky PJ1 traction compound to one of the slicker sections of the course.

“Charlotte Motor Speedway officials wanted to put down PJ1 in both 3 and 4 and 5 and 6,” Snider said. “We saw so many teams in testing have trouble right here. We saw Ryan Blaney, Kyle Busch, Martin Truex Jr. all spin out in this part of the racetrack. So they went and asked NASCAR. 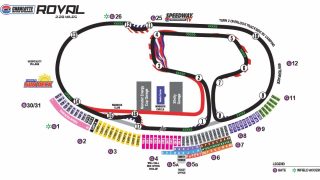 “NASCAR then turned to the driver’s council. The driver’s council actually said no to that. So what you’ll notice here on the exit of 6 is they ran the tire dragon through 3 and 4 and 5 and 6 as well. … They ran it the entire width of the racetrack.”

Utilizing the high banks of the track will cause the cars to carry a lot of speed through the oval segments, so two chicanes are part of the layout. Curb strips not-so-affectionately named turtles are designed to keep drivers from cutting through the middle of the turn.

If they miss the chicane entirely, a penalty will be incurred.

“You’re going to hit (the backstretch chicane) at about 150 miles per hour,” Snider said. “There’s also one on the frontstretch as well and this isn’t like the chicane you see at Watkins Glen that everyone calls the bus stop. NASCAR told me today, if you miss this chicane or the frontstretch chicane … it’s an automatic drive-through penalty. … If you miss it on the last lap of the race, it’s a 30-second penalty.”