BROOKLYN, Mich. – The new man in charge of NASCAR struck a typically unassuming stance at the back of the garage Saturday morning.

Clad in a short-sleeved white shirt and a pair of jeans with a belt clip bearing a smartphone in an American flag-embossed case, Jim France could have blended in with any of the thousands of fans at Michigan International Speedway this weekend.

If not for vice chairman Mike Helton sitting in a chair to his left, there was no obvious sign that the recently named interim CEO and chairman of NASCAR appeared to quietly be taking stock of the enormous responsibility he inherited Monday after an indefinite leave of absence by his nephew, Brian France. 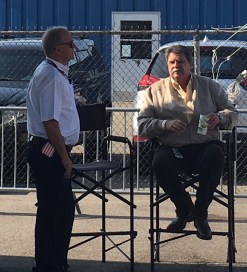 Public anonymity seems just fine with Jim France, who rarely has granted interviews during more than three decades as a high-ranking executive of NASCAR and International Speedway Corp.

Approached by two reporters for comment Saturday morning, France politely declined and said he was getting “my feet on the ground” and needed “time to get caught up to speed.”

What about the multitude of approving drivers and team owners in the NASCAR industry who said he already was well versed?

“I’ve been fooling them, you know,” France joked, adding that he might comment “when I get to the point of feeling where I feel like I have something smart to say.”

But then the 73-year-old lingered to say something that spoke volumes in its own way – fondly reminiscing with a reporter who covered France racing a Legends car more than 25 years ago.

While his net worth once was estimated at more than $1 billion and he’s helmed a publicly traded company, “businessman” is rarely the word used to describe France – particularly by those whose fortunes he will directly affect as NASCAR’s final authority.

“A racer,” said Clint Bowyer, who first got to know France well while on a weekend fishing trip more than 10 years ago. “When you really get to know him and talk to him and get some words out of him, he knows what is going on. He loves sports car racing, loves flat track racing, loves motorcycle racing.

“This guy is a racer. He is definitely a neat guy. If you talk to him, if you know him, I think you have experienced that. All of my conversations with him have revolved around racing, all forms of racing. That is cool and a breath of fresh air to be around someone like that.”

Ten drivers got a glimpse of his low-key management style Friday night when he attended a Drivers Council meeting at Michigan. France mostly listened but unobtrusively added some viewpoints as hot topics such as the 2019 rules package were discussed.

“He just weighed in, and I think everybody in the Drivers Council knows him in some capacity or have met him,” Ty Dillon said “There was no blip in the meeting where we spent time introducing Jim and figuring out what role he was going to do or how he was going to change NASCAR. It was just continuing down the path of working together to make the sport better.

“It was business as usual.”

It actually was business as it was nearly 20 years ago when Jim France stepped in to guide NASCAR for several months (with Helton as his primary lieutenant) as Bill France Jr. took a leave to battle cancer.

Though Jim France kept a low profile during his first stint as NASCAR’s acting chief, he was at the track weekly just as his older brother had been and in the same hands-on manner of their father, who was engaged full time for a quarter-century while running the sanctioning body that he founded in 1948.

Since being named CEO and chairman of NASCAR by his father in September 2003, Brian France took a decidedly different approach than his predecessors, whom he admitted were more heavily interested and involved in competition.

Brian preferred to delegate on-track matters to an executive team while focusing on long-term strategy and negotiating title sponsorship and TV contracts. He annually attended roughly a third of the 36-race schedule.

That drew pushback from champions such as Tony Stewart and Brad Keselowski, who both thought the CEO should be more available at the track.

Both probably will be glad to learn that Jim France is expected to become a weekly fixture – but in a manner very different from his older brother, who often sat in a director’s chair outside the NASCAR hauler and was highly approachable to the media.

Jim France will be avoiding cameras and microphones but likely will stay actively involved behind the scenes in a style that Stewart finds likable.

“Jim’s very grounded,” Stewart said. “I feel like Jim’s a guy who is in touch with what’s going on, and that’s what you’ve got to have.”

Said Keselowski: “He’s been a really friendly person to me. He reached out to me a couple of times in the past. Obviously, he’s got a vested interest in seeing (NASCAR) be successful. I think that’s great. He’s been around to see the history of the sport. I think time will tell. I don’t really have a strong thought on it now until I can see it in action.

Many drivers already have some strong ties with France, who has been heavily involved with the direction of the IMSA sports car series since founding the Grand-Am road racing circuit in 1999.

Kyle Busch said he “probably would admit that I have a better relationship with Jim than I did with Brian. I’ve seen Jim around, I’ve talked to him a few times and he’s kind of been more of the IMSA side for NASCAR and now is on our side here with the stock-car side.

“I’m looking forward to building that relationship more and seeing what all that entails. I think there needs to be a good dialogue between the leadership of NASCAR, whoever that is from top through the next 10 and the drivers and the team owners. Hopefully Jim can be that guy to give us that type of confidence.”

Jimmie Johnson was invited on a few fishing trips with the France family and once had France’s daughter as a neighbor in Charlotte for a few years (France’s son in law got the seven-time series champion into road cycling).

“I’ve been around Jim a lot over the years,” Johnson said. “His love for motorsports and NASCAR was always very apparent to me, and with the decades of experience he has within motorsports, I feel very confident that he’s going to be able to get in there and lead as he needs to.

“My experience with racing the Rolex 24 is certainly something he’s very passionate about and heavily involved with, so I’ve been around him a lot and think he’s got a great temperament and certainly knows racing.”

Said Kevin Harvick, who has interacted briefly with France: “It’ll be interesting to see his perspective on things. It’s not like he hasn’t been involved, just not on a weekly basis and day-to-day decisions. It’ll be interesting to see how all that works out. I think that’s one thing everyone could work on in making sure that the relationship with the drivers is better than it has been in the past.”

“It’s kind of that same thing with Jim,” Hamlin said. “He was over on the IMSA side and now he’s over here on the Cup side. He’s obviously not a very talkative guy, but their whole family has done a great job of really rejuvenating some of their racetracks and making them better and I’m glad that they’re reinvesting in our sport and they’re here for the long haul.

But he will be doing so quietly. In the driver meetings at Michigan for the truck and Cup series this weekend, France snuck in just before the start and took a seat, blending in with the crew chiefs, drivers and sponsor VIPs.

His attendance was only noticeable after the race when he chatted at length with team owner Roger Penske.

“Jim has got a lot of knowledge about the sport and grew up in the sport and obviously with his dad and Bill Jr., and I think under the circumstances, he certainly understands the dynamics of the sport going on today with the marketing of the sport,” Penske said. “We’ve dealt with him on the IMSA side. A real rational guy. He’s a good friend of the guys in the garage area, and at this time I think, for me, it was the right thing for him to do to step in. He probably wasn’t ready to do that, but as a leader, he would always be ready to do that.”