Denny Hamlin will use his throwback paint scheme for the Xfinity race at Darlington Raceway (Sept. 1 on NBCSN) to honor the man who helped bring him into the Joe Gibbs Racing family.

Hamlin will drive a scheme in honor of J.D. Gibbs, the son of team owner Joe Gibbs. 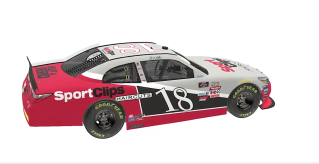 Gibbs, a co-chairman of JGR and former team president, began receiving treatment in 2015 for speech and processing issues that were part of his overall brain function. The issues reportedly stem from his time playing football in college.

Hamlin has displayed Gibbs’ name on the driver side of his No. 11 Toyota in Cup since the 2017 Daytona 500.

In the below video posted to Twitter announcing the paint scheme, Hamlin explained how Gibbs discovered him on a cold night at Hickory Motor Speedway in Hickory, North Carolina. Their relationship led to Hamlin joining JGR in 2004.

His first start for the team came in the 2004 Xfinity race at Darlington.

.@dennyhamlin's @SportClips #XFINITY Series #throwback is a tribute to JD Gibbs, who helped give Denny his start.

The scheme on Jones’ No. 20 Toyota is a tribute to the Camping World Truck Series career of Jones’ spotter, Rick Carelli.

What do you think of @erik_jones' @SportClips Toyota #Camry #NASCARThrowback paint scheme honoring his spotter @RickCarelli (AKA "The High Plains Drifter")?

What do you think of @erik_jones' @SportClips Toyota #Camry #NASCARThrowback paint scheme honoring his spotter @RickCarelli (AKA "The High Plains Drifter")?