As part of its way of reinventing how it presents NASCAR races to fans, NBC Sports will present an analyst-only broadcast for the July 22 Cup race at New Hampshire Motor Speedway (2 p.m. ET on NBCSN).

Steve Letarte, Jeff Burton and Dale Earnhardt Jr. will call the race from the booth. Called from NASCAR on NBC’s traditional broadcast booth above the start-finish line, the “NBC Race Team Broadcast” will bring fans closer to their favorite drivers and teams as pre-playoff competition heats up at “The Magic Mile.”

Lead broadcaster Rick Allen will report from pit road to give fans a different view of the Cup race. Allen will call the Xfinity race at New Hampshire Motor Speedway this Saturday, July 21 at 4 p.m. ET on NBCSN alongside Earnhardt and Burton. Letarte will contribute from the Peacock Pit Box.

Allen will return to the broadcast booth for NBCSN’s broadcast of the Cup race at Pocono Raceway on July 29.

The broadcast lineup at New Hampshire is one of many NBC Sports has used and will use to broadcast Cup races this season. Already, NBC Sports has put its broadcasters in two separate booths and had Steve Letarte on the Peacock Pit Box. Additional variations are planned later this year.

“We have a multi-option offense, and are again excited to try a different booth setup for our NASCAR Cup Series race broadcast in New Hampshire,” said Sam Flood, Executive Producer & President, Production, NBC & NBCSN. “We’re putting people in positions to make it fun for the audience, and the ‘NBC Race Team Broadcast’ will bring a unique and different perspective to the race.” 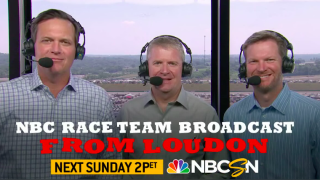