Let us know if you’ve heard this one before: Kyle Busch, Kevin Harvick and Martin Truex Jr. are really good at 1.5-mile tracks.

It’s just part of the narrative that surrounds the Cup drivers who have been dubbed the “Big 3” through the first 18 races of the season.

In the six races held at 1.5-mile tracks so far, Harvick and Busch have split the wins evenly at three.

That’s the fewest different winners through six 1.5-mile races ever. The previous low was three in 1998 and 2013.

Truex, who won a series-record seven races on 1.5-mile tracks in 2017, has finished in the top five in all but one (Texas, DNF).

Despite a victory on a 1.5-miler not being among his three wins this season, Truex still has won five of the last 12, including his win in last year’s finale at Homestead-Miami Speedway.

With help from Racing Insights, here’s a deeper look at how the “Big 3” are performing at intermediate tracks this year compared to the rest of the competition.

Busch has won three of the last four races on 1.5-mile tracks and finished in the top 10 in the last seven races, matching his career longest streak.

Busch is the only driver this season to finish in the top 10 in all six 1.5-mile races.

Here’s how Busch and Harvick match up head-to-head at 1.5-mile tracks so far. 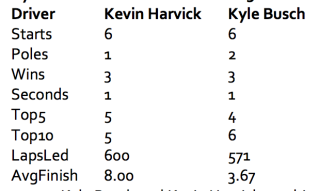 The series heads to Kentucky Speedway, a 1.5-mile track, this weekend.

Truex claimed the win there last year over Kyle Larson and Chase Elliott.

As for Harvick, Kentucky stands as one of the two active tracks he’s raced at in Cup without scoring a win. It’s the only active track he hasn’t even finished in the top five at. His best finish in seven starts there is seventh in 2014.

Now here’s a look at who could impede the “Big 3” from visiting Victory Lane Saturday night (7:30 p.m. ET on NBCSN).

If anyone owns the track in Sparta, Kentucky, it’s Keselowski.

In fact, since his first start there in 2011, Keselowski has never gone more than a year without winning at Kentucky. On the flip side, his three wins represent his only top fives there.

Through six 1.5-mile races this season, Keselowski has two top fives, a runner-up at Atlanta to Harvick and a fourth in the Coke 600.

Larson has finished second four times this season without a win, leading all drivers. Only one of those, in the dramatic finish two weeks ago at Chicagoland, was at a 1.5-mile track. He’s placed in the top five in two other 1.5-mile races (Kansas, Las Vegas).

In 53 starts on 1.5-mile tracks, Larson has seven runner-up finishes without a win, an all-time high.

All seven of those second-place finishes have been at different tracks.

His runner-up finish at Kentucky last year is his only finish better than 19th there.

Larson is one of nine drivers who won in 2017 who have not this season.

Should Larson finally breakthrough Saturday, he would deliver Chevrolet its first Cup win at Kentucky. It’s the only active Cup track Chevy has not won at.

What’s working against anyone wanting to get their first win this season and chip away at the “Big 3”?

In seven races held in Kentucky, no driver has ever earned their first win of the season there.