The Sept. 30 Cup race on the Charlotte Motor Speedway road course will be 400 kilometers and called the Bank of America Roval 400, the track announced Monday.

The race, the longest road course event in NASCAR, will be held on a 2.28-mile, 17-turn circuit and is the last race in the opening round of the playoffs. The race is scheduled to air on NBC.

The circuit, which includes most of the 1.5-mile oval, is the second longest of the three road courses the Cup Series visits. Watkins Glen International is 2.45-miles and Sonoma Raceway is 1.99-miles.

The announcement came the day before the first of two open tests for Cup teams on the road course. 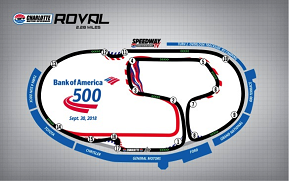 A second test will be held July 17.

NASCAR held a test on the road course with its original 2.4-mile, 13-turn layout in October. Busch, Truex, Daniel Hemric and Jamie McMurray took part in it.