Leavine Family Racing announced a throwback paint scheme for Kasey Kahne on Tuesday, but you won’t have to wait until the Southern 500 to see it in action.

Kahne’s No. 95 Chevrolet will get the retro treatment this weekend in the Monster Energy All-Star Race.

The scheme celebrates the 10th anniversary of Kahne’s lone win in the exhibition race. 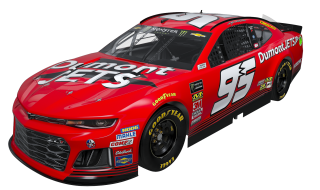 Kahne won the 2008 edition of the event when he drove the No. 9 Dodge owned by Ray Evernham.

Kahne won the event only after he was voted in by fans following the Open. He remains the only driver to win the race after being the winner of the fan vote.

“It was so awesome that the fans voted us into the All-Star race back in 2008,” said Kahne in a press release. “It really was special to get voted into the race, and then to have a great car to be able to drive our way to the front in order to make strategy calls that put us in position to win.  Our paint scheme for this weekend looks so similar to that scheme we ran in 2008’s event, that it’s been cool to see it in the shop as the guys have been getting ready for this weekend.  I’m looking forward to racing it this weekend, and hopefully the paint scheme can bring us the same result we had ten years ago.”

Kahne’s participation is the race this year is Leavine Family Racing’s first time in the main event.