A year to the day after announcing he would retire from full-time NASCAR competition, Dale Earnhardt Jr. revealed an upcoming book about his experiences with concussions, notably the one in 2016 that nearly ended his career.

“Racing to the Finish: My Story” is co-written by ESPN’s Ryan McGee and is scheduled to be published Oct. 16. You can pre-order it now.

Earnhardt revealed the book Wednesday on NASCAR America and explained the inspiration behind it.

The 15-time most popular driver missed the final 18 races of the 2016 season after he began experiencing concussion-like symptoms during the July race weekend at Kentucky Speedway. The symptoms stemmed from a wreck at Michigan International Speedway three races earlier.

Many of the details in the book come from a journal Earnhardt began keeping during his first concussion experience in 2012. 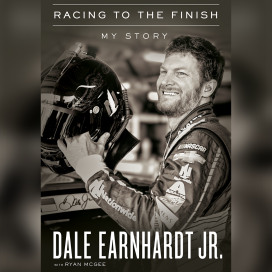 “I don’t think nobody outside (wife) Amy and my doctor knows exactly everything that went on, and how bad it was” Earnhardt said. “There’s a couple of reasons I wanted to write this book. My fans ask me all the time about why I retired early from driving when I probably had a couple of more years. I think this will answer all those questions.”

Earnhardt hopes the book will also help those who have gone through similar situations and felt “helpless.”

“There’s some really, really bad moments, very dark moments,” Earnhardt said of his recovery. “There’s some helpless moments. You want to give up. Luckily, I had a really good doctor that I could call at any hour of the night and talk me off this ledge and help me understand that this is going to get better and tell me that you’ve fixed this in someone else.”

Earnhardt was open during his recovery process, posting videos of himself taking part in exercises to show what he was doing to get back to full strength.

“When I was writing all those notes, I didn’t know why I was writing them other than I was scared of what I was feeling and what I was going through,” Earnhardt said. “If something were to happen to me where I couldn’t articulate these experiences, there they would be.”

Even before his 2016 concussion, Earnhardt revealed he would donate his brain to CTE research.

Watch the above video for more.