Never one to shy from stoking the embers of a controversy, Texas Motor Speedway president Eddie Gossage unfurled his 10-foot-high take on the generational divide in the Cup Series that has become one of the defining stories of the season.

“The New Kids On The Track” were introduced Friday via a banner hanging from the broadcast tower adjacent to victory lane at Texas. Per Gossage (who had told NBC Sports in a February story that he was kicking around such a branding idea), NASCAR’s new Magnificent Seven of the Under 30 set are Daniel Suarez, Bubba Wallace, Erik Jones, Chase Elliott, Ryan Blaney, Alex Bowman and William Byron.

.@TXMotorSpeedway has a new banner featuring the young guns, and a clever @KevinHarvick sign! 😂

A much smaller sign alongside highlighted a recent tweet by Kevin Harvick on the advanced age of race winners in 2018.

In case anyone was wondering average age of the winners in the first six races 38.5. #oldguysrule

Harvick also took note of the fact that the combined career win total in Cup for the New Kids on the Track … is one. 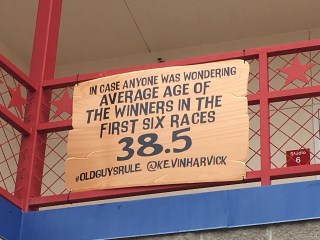 “It’s a cool promotion if you like good marketing,” Harvick said. “But if you like winners, you go for the old guys.”

The Stewart-Haas Racing driver was smiling, but it was another reminder of the undercurrent of tension running through a storyline that dates to January when Kyle Busch expressed his annoyance of a NASCAR marketing push for youth.

This week on the NASCAR on NBC Podcast, Brad Keselowski said it was natural for veterans to be jealous of their younger peers because many (such as Busch and Keselowski) lacked the exposure and visibility at the same age despite producing much better results than the new wave of Millennials.

“I love every one of those kids on that poster,” Harvick said. “I think they’re all great for our sport, and I’m not taking personal digs at them. I’m trying to have as much fun with it as I told them they should have fun with it, too.

“That’s really what it’s about. It’s the dad and kid sitting in the grandstands from two different generations. Mom and daughter sitting in the grandstands from two different generations. They root for the young guys, you root for the old guys, and that’s great for our sport, it really is. It makes it fun to be able to have that banter back and forth. So yeah, most of those guys probably don’t even know who New Kids on the Block are. I would venture to say that.”

Harvick, a 42-year-old who was on the cusp of high school when the New Kids on the Block became America’s breakthrough boy band of the late 1980s, was right.

In an informal and incomplete poll, only Ryan Blaney was able to lay claim to knowledge of the New Kids, though he didn’t know any songs and sometimes is confused about the lineup.

“I get them and Marky Mark and the Funky Bunch mixed up ((Mark Wahlberg’s brother, Donnie, was in NKOTB),” Blaney said. “I thought (the banner) was pretty funny. I saw a picture of it last night. I thought that was pretty neat. Eddie has always done really well at making things fun and light. It’s just cool to be a part of that group.”

Erik Jones, who will turn 22 next month, was at least savvy enough to learn that he was born after the group went defunct in 1995 (at least before the inevitable cash-grab reunion tour a few years ago).

“They asked me what New Kids on the Block I was and I was like ‘Man, I’ve got to be honest with you, I have no idea,’ “ he said. “I saw that (banner) though. It’s cool. It made me laugh. I liked the (Harvick) sign they put next to it better. At first I thought Harvick actually put it there. I was like that, that’s pretty funny, but then I realized the track did it.”

No hard feelings, though, many of the younger drivers say.

“We haven’t had a young crop of guys all enter the sport at once in probably 15 years now,” Jones said. “When you see this many young guys coming at once, obviously I think NASCAR’s done a good job trying to promote us and give us an advantage early on to get our names out there and get some more fans and get some more exposure and you know we all appreciate it.

“We’re willing to take advantage of those events and I think Blaney said it well. I think we’re just more willing to take some of these opportunities that they’re not willing to. You know a lot of them have families and want to spend as much time at home as they can and for us to take a trip to wherever or spend some extra time somewhere isn’t as big of a deal. I think we’re just more willing right now to take advantage of some of those opportunities.”

Texas will be taking advantage of the promotion this weekend as Gossage said a mashup of the young drivers and the New Kids song “Hangin’ Tough” will air often on Big Hoss, the track’s enormous backstretch videoboard.

Daniel Suarez, who was happy the banner made him feel young and had no knowledge of the New Kids, believes there is some latent jealousy among older drivers.

“I think a little bit,” he said. “What I think is all the veteran drivers are very strong and have a very strong fan base and obviously a lot of support. They have pretty much the path already made. I feel like for young drivers, sometimes we need that extra push to start making that path and building that fan base. There’s nothing wrong to have extra support.

“Kevin, Kyle, any of veteran drivers when they were young in middle 20s, am sure they had good exposure to build brand and fan base. That’s what I think, but maybe that’s part of racing, too. Everyone is competitive, not just on the racetrack but sometimes out of the racetrack.”

Said Blaney: “I’ve said it all along, it’s just really fortunate to be involved in not only in NASCAR but involved in this younger driver group with some of those guys. I don’t really look at age. I don’t care if you’re 18 years old or 50 years old, we’re just competitors. I think it was a pretty neat thing that Gossage did.”

“I like how (the banner portrays him) throwing up the peace sign, too,” Blaney said. “I’ve never done that in my life.”