Given that a grandfather clock went to the winner, it was about time for Clint Bowyer to win Monday’s rescheduled STP 500 at Martinsville Speedway.

Postponed one day due to snow at the track on Sunday, Bowyer finally broke a 190-race winless streak, earning his first trip to victory lane since the fall race at Charlotte in October 2012.

It was also Bowyer’s ninth win in his 13-year Cup career in 439 starts. 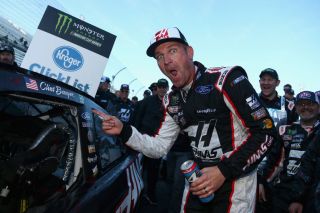 The 38-year-old Bowyer took the lead from Ryan Blaney on Lap 285 and after briefly losing the lead, led the final 114 laps. It was the 43rd career win for Stewart-Haas Racing.

“To have it come here, a place where I’ve gotten so close and wanted to win that grandfather clock … it was just time,” Bowyer told FS1. “I told my son this morning, ‘Damn it, we’ve got to get a picture in victory lane.”

How Bowyer won: In his first career win at Martinsville, Bowyer took the lead for good on Lap 285, but it was getting a good jump on the final restart of the day (Lap 392), that iced it for Bowyer, holding off Kyle Busch and others who would stay close but could never pass Bowyer.

Who had a bad day: Darrell Wallace Jr. suffered mechanical problems early in the race and finished 34th, 14 laps down. … Jamie McMurray spun into the wall after being tapped by Austin Dillon on Lap 385, but was able to continue. Still, the damage was done, as McMurray finished 26th, followed by Dillon (30th), Trevor Bayne (33rd) and Ricky Stenhouse Jr. (37th).

Notable: Bowyer led more laps today (215) than in his last 159 starts combined. … Bowyer becomes the only driver in Cup history to win in all three active manufacturer rides (Ford, Chevrolet and Toyota). … Stewart-Haas Racing has now won four of the first six races of 2018 (the other three wins came from Kevin Harvick at Atlanta, Las Vegas and Phoenix). … The race had only 38 cars in the field, two short of the usual 40-car field.

Quote of the day: “You start to question if you can get it done or not. To have it come at this place meant a lot.” – Clint Bowyer

What’s Next: The Cup, Xfinity and Truck series all have the Easter weekend off. The next Cup race is the O’Reilly Auto Parts 500 at Texas Motor Speedway on Sunday, April 8.