If Kurt Busch’s car in this year’s Bojangles’ Southern 500 throwback race at Darlington Raceway looks familiar, there’s a good reason for it.

Busch will drive a car with a paint scheme similar to the car he drove at the 1.366-mile egg-shaped track in the 2003 Carolina Dodge Dealers 400.

And what a race that was. Busch’s No. 97 Rubbermaid-sponsored red and gray Ford had a last-lap fender-banging battle with Ricky Craven’s No. 32 Cal Wells Racing Pontiac, which ended up 0.002 seconds ahead of Busch for the win. 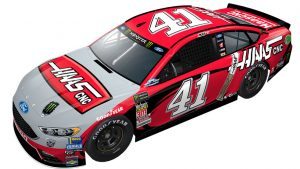 Ironically, tomorrow, March 16, marks the 15th anniversary of what at the time was the closest finish in NASCAR history.

Busch’s Darlington black, red and gray throwback scheme – the first of all teams to be revealed for this year’s race – on his No. 41 Haas Automation Ford Fusion, was first unveiled by NASCAR.com.

Busch has never won at Darlington. His 2003 runner-up finish has been his highest finish, though he’s also finished third in 2010 and in last year’s race.

This will be the fourth consecutive year for Darlington’s popular throwback weekend. This year’s theme is “seven decades of NASCAR” across the entire weekend from Aug. 31 to Sept. 2.

Stewart-Haas Racing has won the best throwback paint scheme the last two years (in voting at NASCAR.com), last year with Danica Patrick’s No. 10 car (a blue-and-white look that honored NASCAR Hall of Famer Robert Yates), and Tony Stewart’s car for his final race at Darlington in 2016 that honored Bobby Allison.