Beard Motorsports announced Wednesday that Brendan Gaughan will be entered in the four Cup restrictor-plate races this season.

Gaughan ran both Daytona and Talladega Cup races last year for the team, finishing seventh in the July Daytona race and 11th in the Daytona 500. He was 19th in the fall Talladega race and 26th in the spring event.

Beard Oil Distributing and TTS Logistics are back as sponsors and will be joined by South Point Hotel & Casino and City Lights Shine.

“I have had more fun racing with Mr. Beard for the four races last year than I had in my prior 50 Monster Energy NASCAR Cup Series starts,” said Gaughan in a statement from the team. “I’m also very excited about the car that RCR has built for us, Richard Childress has been an amazing friend and I appreciate how much support he is giving to the Beard Motorsports Chevrolet in our part-time efforts.
“I would personally like to thank the entire Beard family for continuing this opportunity and for allowing us to run the number that has been so special to me my entire career.”
Darren Shaw returns to the be the team’s crew chief. The team also will use ECR engines again this season. 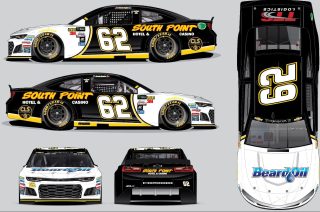