Three men have been arrested in connection to the attempted burglary of Richard Childress’ home in Lexington, North Carolina, on Dec. 17, the Davidson County Sheriff’s Office announced Tuesday. 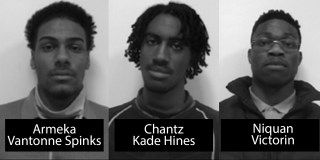 Victorin, Hines and Spinks are in the Davidson County Detention Center under a $250,000 secured bond and are scheduled to appear in Lexington District Court on Jan. 29.

A $50,000 reward had been announced for information leading to the arrest and convictions of those involved in the crime.

The arrests are the result of an investigation involving the Davidson County Sheriff’s Office, the Winston-Salem Police Department (WSPD) and the State Bureau of Investigations (SBI).

During the investigation, Sheriff’s investigators learned from the WSPD that three firearms matching the description of those used in the attempted burglary had been reported stolen on Dec. 15.

Victorin, Hines and Spinks were identified as potential suspects and after further investigation, it was found that all three matched the physical descriptions of the suspects involved in the crime.

Victorin, Hines and Spinks were then questioned and arrested.

The trio already has a previously scheduled court date for March 5 related to a felony charge in Forsyth County for obtaining property under false pretenses.

Spinks is scheduled to appear in court on Jan. 5 for multiple counts related to a traffic stop for speeding in Rowan County, including a misdemeanor for possession of stolen goods.