Martin Truex Jr. continues to rack up the honors.

The defending NASCAR Cup champion was named Friday as the 2017 Colorado Sportsperson of the Year by Mile High Sports magazine.

Truex’s photo is on the cover of the current Mile High Sports. He was also named Colorado’s “Fan Favorite” Athlete of the year in a fan vote on the magazine’s website, MileHighSports.com. 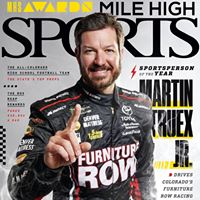 “What Martin Truex Jr. and Furniture Row Racing did this year was not only unprecedented for the team and the state, but it was hands down the best sports story of the year,” Mile High Sports magazine editor-in-chief Doug Ottewill said in a media release. “What he had to go through personally, what the team had to overcome along the way – all of it made our choice for Sportsperson of the Year an easy one.

“This is our highest honor – the big one, the one that the likes of John Elway, Peyton Manning, Missy Franklin and Chauncey Billups have won – and it thrills me to be able to add Martin Truex Jr. to that list.”

Driver of the No. 78 FRR Toyota Camry, Truex earned a NASCAR Cup series-high eight wins, capped off with a win in the season-ending and championship-deciding race at Homestead-Miami Speedway.

“Individual honors in a team sport are a result of the people you are surrounded with,” Truex said in a statement. “I feel blessed to be part of an outstanding organization led by our owner Barney Visser, team president Joe Garone and crew chief Cole Pearn.

“These honors represent the hard work by the talented individuals at our Denver race shop. I want to thank Mile High Sports and all our passionate Colorado race fans for the support they have given our team through the years.”

Furniture Row Racing, which calls the Denver, Colorado area home, is the only active NASCAR Cup team based west of the Mississippi River and 1,500 miles from the Charlotte, North Carolina area, where most NASCAR teams are based.

“I guess we have heard ’that’s impossible, you will never do that’ for the last time,” Visser said in a statement. “We are very proud of our Denver roots and to receive these prestigious awards in our home state makes it even more special.

“The Colorado fans have been loyal followers of our team and we are honored to bring a major championship to the state.”

The Colorado honors add to an already lengthy list of awards that Truex, Pearn and Furniture Row Racing have earned, including:

* Truex was recently named New Jersey Sportsperson of the Year.

* AutoWeek magazine named Truex Driver of the Year and Furniture Row Racing was named Team of the Year.

* NASCAR.com named Truex Driver of the Year, Pearn was named Crew Chief of the Year and Furniture Row Racing was named Team of the Year. Truex and longtime partner Sherry Pollex were also awarded Best Moment Off The Track.