Dale Earnhardt Jr. has set a new benchmark for Lionel Racing’s most purchased diecast in its 25-year history.

Lionel Racing, NASCAR’s official diecast producer, has announced that the diecast of Earnhardt’s “Last Ride” No. 88 Chevrolet in the Cup season finale last month is now its bestselling diecast in company history.

The “Last Ride” car is based on the No. 8 Budweiser Chevrolet that Earnhardt drove in his rookie Cup season in 2000.

The previous bestseller was another Earnhardt diecast, for his 2014 Daytona 500 win.

Lionel Racing says that QVC’s “For Race Fans Only” show that featured Earnhardt and unveiled the car helped contribute to sales. But even without QVC, sales of the “Last Ride” diecast outpaced the 2014 Daytona 500 diecast by more than 10,000 units.

“The demand for this car has been simply astounding,” Lionel Racing President Howard Hitchcock said on the company’s website. “The fan response to this diecast is a true measure of how much Earnhardt has meant to both casual NASCAR fans and serious diecast collectors.”

Lionel Racing has also revealed the top-10 selling diecasts for the year, which you can find below. Earnhardt has six cars on the list. Chase Elliott has two and Kyle Busch and Ryan Blaney each have one. 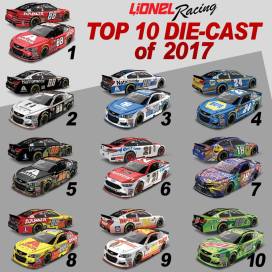