The golden anniversary of one of the most popular short track races in all levels of stock car racing takes place in Sunday’s Snowball Derby.

The 50th running of the Super Late Model classic takes the green flag at 3 p.m. ET at 5 Flags Speedway in Pensacola, Florida. The race will be televised on pay-per-view on Speed51.com.

Only 37 of the 67 cars that submitted entries will take part in Sunday’s 300-lap main event around the high-banked paved half-mile. 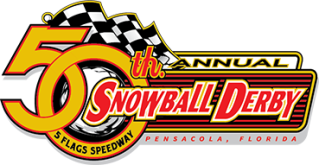 Preston Peltier will start from the pole, while defending Derby winner Christian Eckes failed to qualify on a tiebreaker Friday, but will race Sunday because of a past champion’s provisional.

Kyle Busch was not happy with his 15th place qualifying effort, particularly since he and his team had a strong two-day practice at 5 Flags right after the NASCAR Cup season finale at Homestead-Miami Speedway.

“Obviously 15th isn’t where we wanted to qualify, but Rudy (Fugle, crew chief) and all the guys made our Toyota, Phoenix Construction Camry a lot better for final practice,” said Busch, who was sixth-fastest in Saturday’s final practice session.

“We made some 20-lap runs and we feel like we have good long-run speed, but we’re probably still lacking a little bit of speed firing off compared to the guys that qualified up front.”

Busch has one Snowball Derby win to date, in 2009.

NASCAR has really taken a hold of victory lane at the Derby in recent years. Starting with the younger Busch brother’s win in 2009 and Johanna Long’s triumph in 2010, NASCAR drivers have captured the Derby in virtually every year since, including two-time winners Chase Elliott (2011 and 2015) and Erik Jones (2012 and 2013), and John Hunter Nemechek (2014).

Here’s how Friday’s qualifying played out. Just the first 30 drivers are locked in. Three others, including defending champ Christian Eckes, are locked in with provisional spots, leaving four remaining positions to be filled in Saturday night’s last chance event.