After each season, I go back and look at the photos I’ve taken and reflect upon what was. On this first weekend of the offseason, here’s a few photos from this past season to enjoy and ponder. 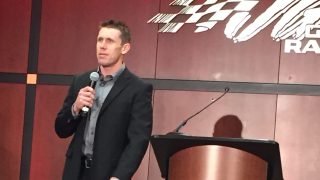 The year began with the shocking news that Carl Edwards would not compete in 2017. Not everyone was convinced that Edwards would go the entire season without getting back into a car. He did just that. Edwards, recently honored for the sportsmanship he displayed in the 2016 season finale in Miami, talked about racing, his life and what might be next. 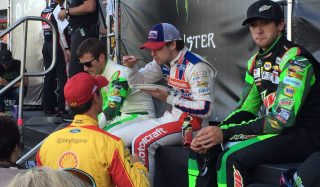 Ryan Blaney finds a few moments to fuel up before the Monster Energy All-Star Race in May at Charlotte Motor Speedway, while hanging with Kasey Kahne, Joey Logano and Chase Elliott. 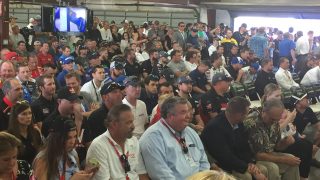 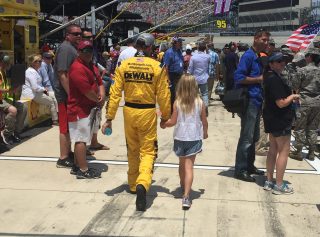 My favorite picture of the year. Matt Kenseth walking with one his daughters on pit road before the playoff race at Dover in September. When we will see Kenseth next? 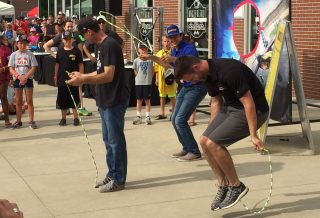 NASCAR experimented with two-day on-track schedules (series officials called those enhanced weekends) that also included fun activities for fans and drivers. In temperatures above 90 degrees at Indianapolis, Kevin Harvick (left), Chase Elliott (center) and Corey LaJoie (right) all used a child’s jump rope to see who was best. LaJoie excelled. I like this photo for the look on Elliott’s face as he watches LaJoie. 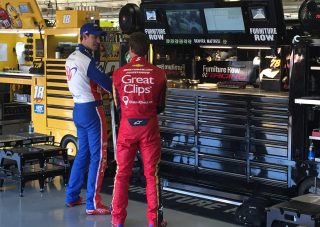 While waiting for their cars to pass inspection at Texas in November, this picture almost could be the start of a joke. A Ford driver (Joey Logano), and a Chevrolet driver (Kasey Kahne) watch qualifying in a Toyota (Martin Truex Jr.) driver’s pit stall … 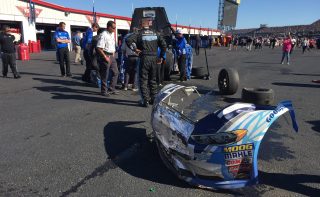 Typical Talladega. Crew members stand around Danica Patrick‘s wrecked car in the spring race. She was eliminated in an 18-car crash. A total of 38 cars – more than the number of chartered teams – were eliminated by accidents or for being parked related to accident damage in the two Talladega Cup races this year. 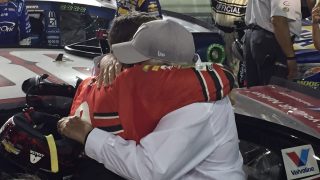 Dale Earnhardt Jr. and Rick Hendrick embrace after Earnhardt climbed from his car at Homestead-Miami Speedway, his final Cup race. Nothing else needs to be said.