Martin Truex Jr. felt he could only do so much in Sunday’s Ford EcoBoost 400. But if he was to win his first career NASCAR Cup championship, he was going to need some help.

And that’s when Truex revealed he did what he could, but he left the outcome in the hands of a higher power.

“I’ve learned along the way that God has a plan, you never know what it’s going to be and sometimes, it’s your time,” Truex said. “This year felt like our year. Everything went the way we needed it to go. We worked hard, we worked our butts to get here.

“But at the end of the day, there is a higher power. And we worked hard, had faith in each other and had each other’s backs through thick and thin, no matter what it was.

“I’m just so thankful for (owner Barney Visser), his team, what he’s built and believing in me, four years ago when we were just awful. … The whole team is just a big family and it was just meant to be, I guess.

“There was a long time in this race where I thought, ‘This is tough, I don’t know how we’re going to get better,’ but I kept digging and telling them what I needed. Cole made the decision to change his pit strategy, caution comes out and we get the lead, and it’s ‘alright, it’s in my hands. I’ve gotta find it.’

“They were better than me all night long and I found something. I didn’t know if it was there, but I went and looked for it and I found it. Unbelievable.”

Even with the eight wins and now the championship, it’s still been a trying year for Furniture Row Racing. Crew chief Cole Pearn lost his best friend, Jacob Damen, to a bacterial infection in early August at the age of 35.

There also was the loss of team fabricator Jim Watson on Oct. 21, who died of a heart attack while the team was in Kansas City for that weekend’s playoff race.

And then Visser suffered a heart attack Nov. 4 and then underwent bypass surgery two days later. He’s still recovering, so much so that his doctors forbade him from traveling to Homestead and didn’t even allow him to watch the race on TV (he got updates via text throughout the event). 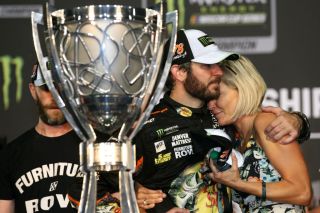 But the most emotional and difficult time of the season for Truex was what Pollex underwent. Pollex had been in remission from ovarian cancer, only to have it recur in early July.

Through Truex’s path to the championship, Pollex has continued to undergo chemotherapy treatment. It was the inner strength from her medical battle that proved to be an inspiration for Truex.

“I thought about this moment so many times but I couldn’t let myself get there because the emotions were just so strong after everything we’ve been through,” Pollex said. “To hear (Truex) say that, he understands now that there’s a bigger picture and God has a bigger plan for us, and that this is where we’re supposed to be, to help and inspire other people at home that are going through any struggle in their life, not just cancer, but everybody’s going through something.

“I feel like God put us in this place for a reason. I don’t want to have cancer, but I do, and I’m going to use my platform to help other people through our foundation and ‘#SherryStrong’ and I think we’ve done that this year.

“I tell him all the time that if you inspire and do things for other people, good things are going to happen to you one day and I truly believe that. I knew that in the end, they were going to come out a winner and it was amazing to be part of it tonight.”

Catch the entire interview with Truex and Pollex in the video above.