Lyons, 28, of Seminole, Florida, will drive the No. 49 Chevrolet Silverado for Premium Motorsports, with sponsorship from Sunwest Construction and Barstool 49ers. 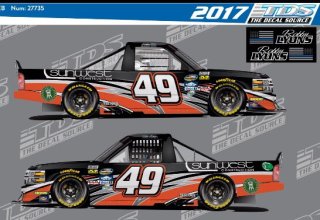 His crew chief will be Brian Keselowski.

“I think the goal for any driver making their debut, especially on a national stage like the Camping World Truck Series, is to make a statement and show that you belong there,” Lyons said in a media release. “I’ve not been behind the wheel as long as a lot of these guys have, but I feel like my biggest asset is that I’m easily instructed, and I listen well.”

“I’m hoping when all is said and done, after the checkered flag (at Phoenix), we all feel as if we’ve accomplished our goal and can look onward toward Homestead-Miami,” Lyons said.