Then there was one.

Five Cup drivers have one race to decide the last spot in the championship four at Homestead-Miami Speedway.

They will battle for it Sunday at Phoenix Raceway in the Can-Am 500 (2:30 p.m. ET on NBC). The only drivers safe are Kyle Busch, Kevin Harvick and Martin Truex Jr.

Brad Keselowski leads the five drivers still eligible for the final spot. Currently in the top four, he leads Denny Hamlin by 19 points after finishing fifth at Texas.

Ryan Blaney is close on Hamlin’s heels, trailing him by three points.

It’s a much more dire scenario for the Hendrick Motorsports drivers of Chase Elliot and Jimmie Johnson. Elliott (-49) and Johnson (-51) are in must-win situations after the first two races of the Round of 8.

Of the five remaining drivers, Johnson (four) and Hamlin (one) have victories at the 1-mile track. 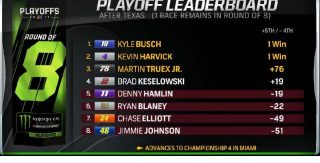