Matt Kenseth will have a special Xfinity, Team USA paint scheme this weekend in the Cup Series race at Texas Motor Speedway.

In collaboration between Comcast and the United States Olympic Committee, the paint scheme’s appearance on track at Texas comes as the 100-day countdown begins for the 2018 Winter Olympics in‎ Pyeongchang‎, South Korea. 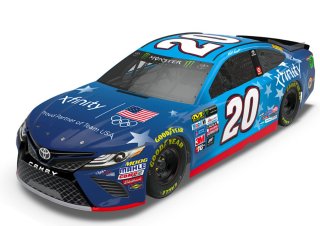 The games will open Feb. 9. and close Feb. 25 and will air on the NBC family of networks.

There are three races left for Kenseth in his tenure with Joe Gibbs racing and possibly his Cup career.

The 45-year-old driver is still looking for his first win of the year. He has not visited victory lane since a 2016 playoff race at New Hampshire Motor Speedway.

Kenseth also will be seeking his third Cup win at Texas. He earned his first two in 2002 and 2011.

In the April race, the No. 20 Toyota started eighth and finished 16th. Kenseth hasn’t earned a top five at Texas since the fall 2013 race.

“Looking back to our first race at Texas this year, it seems like the first race after a repave is always the most difficult race because you have so many notes that all of a sudden don’t apply anymore,” crew chief Jason Ratcliff said in a press release. “You definitely learn a lot and start with a clean slate the first time you have a race weekend on fresh pavement. For us, I think that we’ll be a lot better this time around since we didn’t have the results we wanted at Texas back in April, but we learned a lot that race weekend. … Turns 1 and 2 are so much flatter now than it is in Turns 3 and 4, so before the track was somewhat symmetrical in both ends, but now, it’s not at all.”

Kenseth’s best finish on a 1.5-mile track this season is third at Atlanta. He finished fourth in the Coke 600.

Kenseth was eliminated from the playoffs after the second round. He was ruled out of the elimination race at Kansas for his team sending too many crew members over the wall to repair his car.

Since the playoffs began, his best result is third at New Hampshire in the opening round.