After a chaotic race at Martinsville Speedway to open the third round of the NASCAR Cup playoffs, the only drivers breathing easy are race-winner Kyle Busch, Martin Truex Jr (+67) and Brad Keselowski (+29).

The rest of the eight playoff drivers are in dangerous positions with two races left to determine the championship four at Homestead-Miami Speedway.

Kevin Harvick is in the final transfer spot after finishing fifth at Martinsville. He is only three points in the final four, while Jimmie Johnson is the first driver out.

The driver in the biggest hole is Chase Elliott, who is in eighth, 26 points back from the final transfer spot after his late-race accident with Denny Hamlin relegated him to a 27th-place finish.

Below is the full playoff leaderboard following Sunday’s race.

Also, here’s the grid covering all rounds of the playoffs to date: 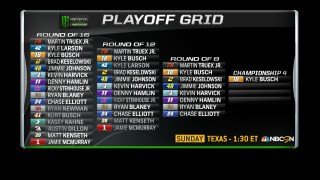