After one race in the second round of the Xfinity Series playoffs, Cole Custer and Daniel Hemric are the two drivers who took the biggest hit in the playoff standings.

Custer dropped from fifth to eighth after he finished 19th, two laps down following having to pit for a tire in the final 10 laps.

It was his worst finish since placing 14th at Richmond in September. He is eight points back from the final transfer spot.

Hemric is seventh in the standings after he finished 18th, a lap down after being penalized for pitting outside his box. It dropped him down from fourth.

It was Hemric’s first finish outside the top 10 since he finished 18th at Darlington.

All four drivers outside the top four – including Matt Tifft and Ryan Reed – are within 10 points of the final transfer spot, but they won’t get the chance to improve their position until Nov. 4 at Texas Motor Speedway. 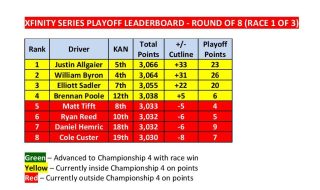