That pretty much sums up the status of the NASCAR Cup playoffs.

Following Sunday’s elimination race at Kansas, which cut the number of drivers still eligible for the Cup championship to eight, the Round of 8 semifinals begin with Sunday’s race at Martinsville Speedway.

Kansas winner Martin Truex Jr. continues to maintain his strangehold on the points going into the second-from-last playoff round.

Truex has a 52 point edge above the cut-off line, while Kyle Busch is 25 points to the good and Brad Keselowski is 9 points ahead.

Kevin Harvick is at the cutoff line, while Jimmie Johnson is below the line, even though both drivers are at 0 points. 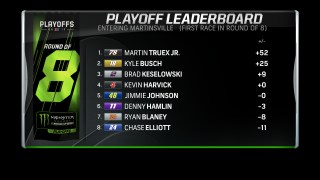