If you’re a Dale Earnhardt Jr. fan, you don’t want to miss his interview on “Sunday TODAY with Willie Geist” — this Sunday at 8 a.m. ET on NBC.

Junior talks with Willie about his career and pending retirement from NASCAR Cup at the end of this season.

One thing Junior laments about is that his late father, Hall of Famer Dale Earnhardt, won’t be around to know Junior’s wife, Amy, and their children.

The couple announced earlier this week that Amy is due to have their first child, a daughter, in May.

“He was this really special, special person,” Dale Jr. said of his father. “He just was everybody’s hero. … People loved him. When he walked into a room, it changed.” 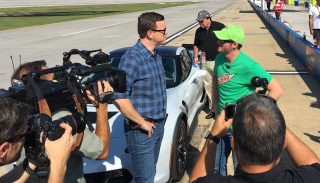 Also during that wide-ranging interview, Junior took Willie on the ride of his life in a Chevrolet Corvette.

Make sure to catch the entire interview with Dale Earnhardt Jr. this Sunday at 8 a.m. ET on NBC’s “Sunday TODAY with Willie Geist.”