NASCAR stated that the car’s package tray did not maintain its original shape. That is the metal that holds the rear window in place.

Blaney will start last in the 40-car field and have the last pick of pit stalls this weekend and next weekend at Martinsville Speedway. There will be no further penalties.

“The rules are pushed to the max in every area, and today the NASCAR officials found something they didn’t like about our car. We’re not disputing their decision. We’ll own it and move on.

“We’ll work on our car in Saturday’s practice, line up in the back on Sunday and look forward to watching Ryan drive his way to the front.”

Blaney enters Sunday’s elimination race two points ahead of Jimmie Johnson, who holds the eighth final transfer spot for the next round. Kyle Busch is nine points behind Blaney and Matt Kenseth is 10th.

Four of the 12 playoff contenders will be eliminated after Sunday’s race.

By starting at the rear, Blaney will be challenged to be in the top 10 by Lap 80 to score stage points. If he doesn’t, he could fall behind Johnson and Busch after the first stage.

Below is Section 20.4.17.8 of the Cup Rule Book, which features a diagram of the package tray 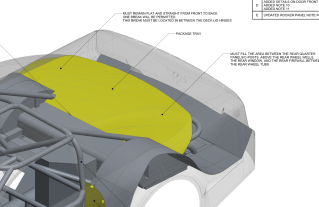 Sorry Guys, We failed post qualifying tech. Our time has been disallowed and we’ll start in the rear. We’ll give it our best shot Sunday!