Jimmie Johnson’s spotter says he’ll be “crossing my fingers” this weekend at Kansas that the mistake he made at Talladega doesn’t keep Johnson from advancing in the playoffs.

Should the seven-time series champion fail to move on to the Round of 8 — he holds the final transfer spot entering Sunday’s race at Kansas Speedway — it won’t be because spotter Earl Barban told the team it could work on Johnson’s car before NASCAR had withdrawn the red flag at Talladega, incurring a penalty that ended the team’s race.

No, Johnson, crew chief Chad Knaus and the rest of the team can look at their failure to collect as many Stage 1 points as their competitors. Even if Johnson advances, his lack of stage points could keep him from racing for a championship if he doesn’t win a race in the Round of 8.

Johnson goes to Kansas with a seven-point lead on Kyle Busch for the final transfer spot. Matt Kenseth trails Johnson by eight points. 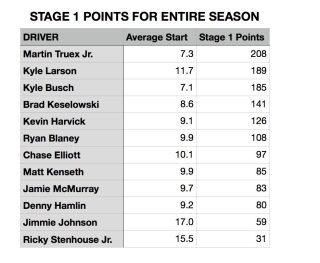 Before the playoffs began, Johnson was asked if there would be more of a penalty for his summer slump that cost him stage points.

“I really think so,’’ he said. “We know our qualifying average doesn’t lead to a Stage 1 opportunity.’’

Johnson’s struggles in qualifying have put him in a mid-pack spot and made it difficult to score many points in the opening stage. His average starting spot of 17.0 this season is worst among the remaining playoff contenders

Johnson’s difficulties in the playoffs have been as pronounced.

Johnson’s 27 stage points are more than only Stenhouse (14) and McMurray (13) in the playoffs. 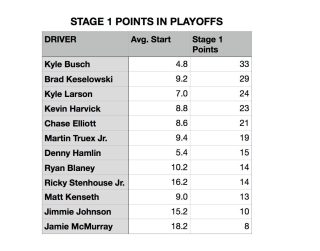 Johnson also has scored 37 percent of his total stage points in the opening stage — the lowest percentage among the remaining title contenders in the playoffs.

To compare with Busch, he has an average starting spot of 4.8 in the playoffs. That’s allowed Busch to score 63.5 percent of his 52 total stage points in the opening stage.

Add it together and Johnson could face quite a challenge to stay in title contention.

Having to hold off Busch won’t be easy, provided Busch doesn’t run into problems.

In four of the first five playoff races, Busch has scored five or more stage points than Johnson in the opening stage. If Busch does that Sunday, he will be in position to pass Johnson for a spot in the next round over the final 187 laps of the 267-lap event.

That’s a likely scenario. Busch has outscored Johnson 80-41 in stage points in the season’s eight races on 1.5-mile tracks.

If Busch moves into a transfer spot, Johnson likely will have to beat Ryan Blaney to have a chance to break his tie with Richard Petty and Dale Earnhardt in championships. Blaney has a two-point lead on Johnson.

The challenges could be difficult for Johnson this weekend.