The second round of the Xfinity Series playoffs begins this weekend when the series heads to Kansas Speedway for the Kansas Lottery 300.

Following an elimination race at Charlotte Motor Speedway, the series and the eight remaining playoff drivers are coming off an off week for the first time in months.

Those eight drivers are led by JR Motorsports’ William Byron, Justin Allgaier and Elliott Sadler. The three drivers have been at the top of the standings since the second race of the first round.

There was a minor adjustment after the Charlotte race. Matt Tifft was penalized 10 driver points for his car failing post-race inspection. But due to the reset in points, it had no bearing on his placement in the playoffs.

Tifft is eighth in the standings and trails Ryan Reed by one point. The bottom four drivers – Cole Custer, Brennan Poole, Reed and Tifft – are each separated by one point. 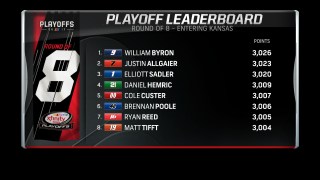