Former NASCAR Cup driver Carl Edwards is among one of more than a dozen individuals that will receive the prestigious 2017 Musial Award.

The annual ceremony will be held Nov. 18 at the Peabody Opera House in St. Louis.

The Musial Awards – named after late St. Louis Cardinals Hall of Famer Stan Musial – “honor this year’s greatest moments of sportsmanship and the biggest names in sports for their class and character,” according to a media release.

Edwards will be honored for his actions in last year’s season finale at Homestead-Miami Speedway. Here’s how the awards committee described what Edwards did that day:

“Last November at Homestead—Miami Speedway, Edwards was among four drivers in contention for NASCAR’s Cup Series championship. He led the season finale race with 10 laps to go. But as he tried to block competitor Joey Logano from passing him on a restart, the two drivers crashed, ending Edwards’ shot for his first Cup Series title. 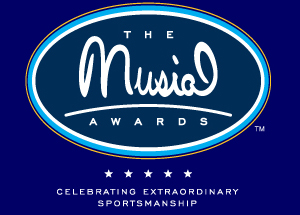 “Instead of losing his cool, as other athletes might have done, Edwards took the high road and showed pure class. He walked over to Logano’s pit crew, shook hands with crew chief Todd Gordon, and wished the team good luck. It was a gesture of extraordinary sportsmanship that was lauded throughout NASCAR.

“Based on the character he has shown throughout his career, it was not a surprise Edwards would take such a gracious approach. Winner of NASCAR’s Busch Series in 2011 and holder of 28 Cup Series wins, the Columbia, Mo., native’s success on the track is equaled by the class, respect and humility he has personified over time.”