Only one race remains in the opening round of the Xfinity Series playoffs and JR Motorsports is in control of the playoff field ahead of Saturday’s race at Charlotte Motor Speedway (3 p.m. ET on NBCSN).

Cole Custer of Stewart-Haas Racing is the highest non-JRM driver in fourth, 14 points back. The driver of the No. 00 Ford has finishes of fifth (Kentucky) and eighth (Dover) to open the playoffs. In his second series start at Charlotte in May, he placed seventh.

Custer’s Kentucky result came after he won the first two stages at the 1.5-mile track.

Prior to the start of the playoffs, Sadler singled out Custer as a threat for the title in the midst of JRM’s dominance.

“The biggest underdog that I think fans haven’t paid attention to as much as we have is Cole Custer,” Sadler told NBC Sports. “Those guys have done a really good job of creating a lot of speed in the last couple of months. So that to me, Cole Custer is going to surprise a lot of fans in this playoffs.”

After Saturday, four drivers will be eliminated from the playoffs. The four who face that possibility now are Brendan Gaughan, who trails Ryan Reed by two points for the final transfer spot. Michael Annett (-7), Blake Koch (-12) and Jeremy Clements (-20) also are outside a transfer spot.

Here is the full playoff grid ahead of the Drive for the Cure 300. 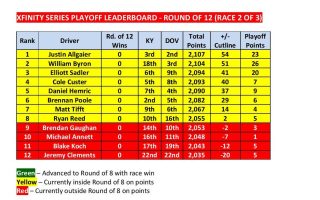