Action sports star Travis Pastrana makes his return to NASCAR this weekend after a two-year absence.

Pastrana, who last appeared in a NASCAR field in October 2015, will drive the No. 45 Chevrolet for Niece Motorsports in Saturday’s Camping World Truck Series race at Las Vegas Motor Speedway.

Pastrana will be sponsored by hot dog restaurant chain Wienerschnitzel in the race. 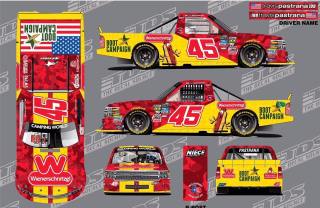 “I love NASCAR, and Las Vegas is always a good time, so I’m really looking forward to this weekend,” Pastrana said in a press release.  “I’ve actually worked with several of the people on this team in the past.  It’s a fun group and we have a good rapport. NASCAR is something that challenges me. I’ve done a lot of work over the past couple of years to try and improve my pavement skills. I’m really excited to be able to get behind the wheel again and see what we can do in the Truck Series.”

This won’t be Pastrana’s first time in a truck this season. He was part of a test at Charlotte Motor Speedway back in May, where the No. 45 was the slowest truck.

“I’ve been able to figure most racing things out and be competitive,” Pastrana told NBC Sports that day. “Everyday at some point, I go ‘why couldn’t I figure out NASCAR? What do I need to do?’ I haven’t had the time to do it right.”

This will be Pastrana’s 45th start in a national NASCAR race. In 2013, Pastrana competed full-time in the Xfinity Series for Roush Fenway Racing.

Since his exit from full-time NASCAR competition, Pastrana has been busy with his Nitro Circus show and competing in Red Bull Global Rallycross.