Earlier this year, Justin Allgaier said there was a good chance all four cars for JR Motorsports could make it all the way to the Xfinity Series championship race.

“I felt like, as an organization, we could get four cars in the playoffs at Homestead when the season was over,” Allgaier told NBC Sports last week. “A lot of people laughed at me, I won’t lie to you. There were a lot of people that felt like that was a very bold statement.

“But when you look at the way that we’ve run and the performance of all four of our cars, I just feel really good about our organization, our people, and I feel like this race team has the opportunity to go into these playoffs and be as successful as anyone.”

After one race in the playoffs, that prediction is going to need some help over the next two weeks to stay a live.

Allgaier, who is tied for the top spot on the 12-driver grid with Cole Custer, leads three JRM drivers in the top five. Elliott Sadler is third (-2) and rookie William Byron is fifth (-6).

Meanwhile, Michael Annett is 11th, 12 points back from the cut line after finishing 16th at Chicagoland.

The second race of the opening round takes the series to Dover International Speedway.

Here is the Xfinity playoff grid after one race. 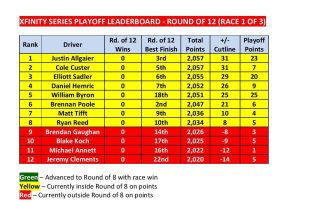