For the second year in a row, Martin Truex Jr. won the playoff-opening race at Chicagoland Speedway to advance to the second round of NASCAR Cup Series postseason.

With his win, Kyle Larson and Kevin Harvick are the top-two drivers among the 15 still competing for the remaining 11 spots in the second round.

There are five drivers primarily in danger of being among the four eliminated following the next two races at New Hampshire and Dover.

Austin Dillon and Kurt Busch are tied with 2,026 points, though Dillon is listed as 12th and Busch in 13th on the grid.

Following them are Ricky Stenhouse Jr., who is four points back from Busch/Dillon, Kasey Kahne (-5) and Ryan Newman (-7).

Below is the full playoff grid following the first race of the first round. 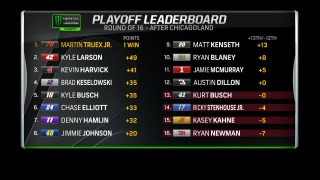