It took 26 races but the grid for the Monster Energy NASCAR Cup Series has been finalized for the 10-race playoffs that begins this weekend at Chicagoland Speedway (3 p.m. ET on Sunday on NBCSN).

Sixteen drivers will fight it out over three rounds with three races in each before four drivers settle the championship at Homestead-Miami Speedway on Nov. 19.

The field is led by regular-season champion Martin Truex Jr., who enters Chicagoland with 2,053 points off his four race wins, 18 stage wins and 15 points from winning the regular season.

In the back half of the field, Ryan Newman, Kurt Busch, Kasey Kahne, Austin Dillon and Matt Kenseth each enter the playoffs with 2,005 points. Kenseth is the only driver of those five whose five extra points were not earned via race win.

Jamie McMurray brings up the rear of the field with 2,003 points.

Kenseth, McMurray and Chase Elliott are the only drivers in the playoffs without a race win.

Six drivers in the field have won Cup titles before. Led by Johnson’s seven titles, they have combined for 12. 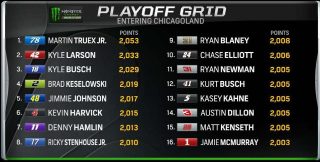