NASCAR unveiled the Monster Energy NASCAR Cup, which will be presented to the series champion Nov. 19 after the season finale at Homestead-Miami Speedway.

The trophy stands 37 inches tall and weighs nearly 70 pounds. It is made of machined aluminum. It took more than 300 hours and was designed by championship manufacturer Jostens.

The trophy features the outlines of all 23 Cup tracks.

The Cup holds about 600 ounces. 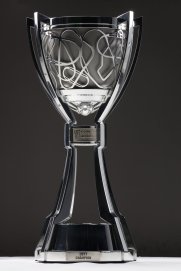