Nearly two weeks after his older brother Shane Sieg died at 34, Ryan Sieg will drive a paint scheme in his memory in Saturday’s Xfinity Series race at Darlington Raceway.

RSS Racing announced Tuesday that Ryan Sieg’s No. 39 Chevrolet will be based on a scheme that Shane Sieg used in a late model in 2003 that also had the No. 39. 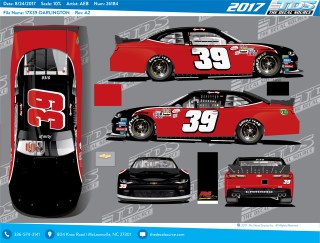 That year Shane Sieg won a NASCAR Southeast Series race at Huntsville Speedway for his family’s team. He was a former Camping World Truck Series driver, having made 68 starts.

“This is the ultimate tribute for my family,” Ryan Sieg said in a press release. “My brother had a love for racing and I’m honored to carry this scheme at Darlington. For my family and our friends this is a very special tribute. I just want everyone to smile when they see the car on track this weekend.”

Ryan Sieg is currently 15th in the points standings and has one top five (Iowa I). His best finish in three Darlington starts is 15th in 2016.