Monday saw the reveal of three paint schemes for the Sept. 3 Southern 500 (on NBCSN). Here’s a look at the cars for Furniture Row Racing’s Erik Jones and Front Row Motorsports’ David Ragan and Landon Cassill. 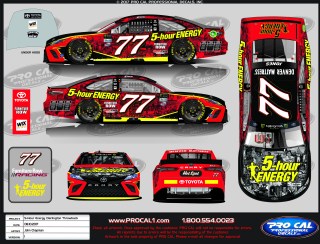 Ragan’s No. 38 Ford will be sponsored by Good Sam. Ragan’s paint scheme is an ode to the RV company’s early days. It was founded in 1966.

Cassill’s paint scheme probably looks familiar. It’s the same one the team used for the last Southern 500 when Chris Buescher drove the N0. 34. The team had to call an audible after Michael McDowell and Leavine Family Racing beat them to the punch on a Kulwicki tribute scheme. Fortunately, Cassill was cool with it.

.@landoncassill's @TooToughToTame scheme: @LovesTravelStop rolls the calendar back to the 80s and the graphic look of its first travel stop. pic.twitter.com/wV5X6fmUkP