Truex broke a tie with Jimmie Johnson with his fourth win of the year, though he holds a large lead when it comes to playoff points. With his four race wins and 14 stage wins, Truex has 34 playoff points to Johnson’s 15.

Chase Elliott, Jamie McMurray and Matt Kenseth kept their spots in the only spaces remaining on the 16-team playoff grid that haven’t been filled by race winners. But with his second-place finish at Watkins Glen, Kenseth increased his advantage over Clint Bowyer in the cutoff spot from 17 to 28 points.

Below is the playoff grid with four races left in the regular season. 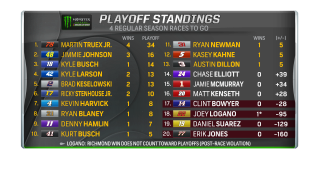