As Kyle Busch and his team found so many ways to lose races, it wasn’t the lack of victories that proved worrisome but the loss of playoff points.

“It was a huge concern,’’ crew chief Adam Stevens said.

It’s not a stretch to believe Busch could have eight victories at this moment, giving him at least 40 playoff points and a path through part of the playoffs — if not all the way to the championship race in Miami.

Instead, he scored his first Cup win of the year Sunday at Pocono Raceway. He has 13 playoff points, trailing Martin Truex Jr. (29 playoff points) and Jimmie Johnson (16). 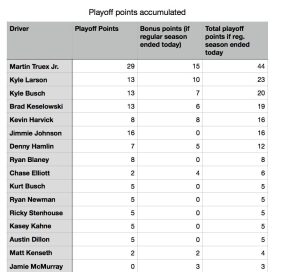 All those lost opportunities for Busch could impact the playoffs. Each stage victory is worth one playoff point. Each race win is worth five playoff points. Those points carry through the first three rounds as long as the driver remains in contention for the championship.

“I don’t think any of us truly understand how important (playoff points) are,’’ seven-time champion Jimmie Johnson said.

They’ll begin to find out when the playoffs open Sept. 17 at Chicagoland Speedway.

Stage racing and playoff points have created extra layers in the races this season. Those changes have forced crew chiefs to plot differing strategies and drivers to be more aggressive. It was evident at Pocono.

Martin Truex Jr. pitted from the lead Sunday shortly before the end of the second stage. He and crew chief Cole Pearn were going for the race win instead of the stage victory. Many followed. Clint Bowyer stayed out to win the stage and collect the one playoff point and 10 bonus points. Bowyer, who is not in a playoff spot, needs all those bonus points.

While teams created models on what it might take to advance in the playoffs, no one knows for sure. It’s reminiscence of 2004 when NASCAR changed the way the championship was decided by implementing the 10-race Chase instead of having the title determined over the entire season. There were many theories of how to run the final 10 races but no one knew what strategy would work.

Drivers and teams that have lost races worry how their missed opportunities this season might impact their title hopes.

Brad Keselowski was the leader for the final restart at Indianapolis last month. He lost the race — and five playoff points — to Kasey Kahne. Could those points be the difference in Keselowski advancing another round in the playoffs?

He rues missed chances for more playoff points this season.

“I wouldn’t say that it was just Indy that I felt that way,’’ Keselowski said. “I felt that way at Richmond and Vegas where we finished second, had a shot of winning, were leading and it fell apart at the end.

“There’s other races where we won. Atlanta, Kevin (Harvick) was probably the best car there. Sometimes you win when you shouldn’t have and sometimes you don’t win where you probably should have. You hope to be on the better side of that. Steal more than you have stolen. Never feels like you are. That’s the bigger picture look that I have at.’’

To put those 44 points into context, when the playoffs start, every driver contending for the title will have their point total reset to 2,000 and have their playoff points added. It’s possible that Truex will lead some drivers by more than 40 points before the opening round begins.

That likely will help him advance to the second round (if he doesn’t win a race in the first round). He would then carry all those bonus points with him after the point totals are reset to 3,000 for the remaining title contenders. Truex still could have a big enough cushion over some title hopefuls that he could advance to the third round even if he struggles some in those three races.

While Truex appears to be in a good spot, these next five races could be critical to Kyle Larson.

He was leading the points after Daytona last month but a 35-point penalty and four finishes outside the top 25 in the last six races has dropped him to second in the season standings with Harvick and Busch closing. Should both pass Larson and he finishes the regular season fourth, he will have lost eight playoff points by fading from first (15 playoff points) to fourth (seven).

Those eight points could be significant in the playoffs.