With eight wins in the first 19 Cup races this season – including three in the last six – you’d think Ford would be at the top of its game.

But such is not the case. While Toyota’s Martin Truex Jr. and Chevrolet’s Kyle Larson have been at or near the front often in recent races, Fords have dropped off in performance.

The two premier Ford teams, Team Penske and Stewart-Haas Racing, have both struggled for more speed and to overcome aerodynamic issues.

“Aero is definitely an area we’re struggling,” Dave Pericak, Director, Ford Performance, said Thursday at Eldora Speedway. “We’re definitely not struggling from an engine perspective and many other areas, but yeah, aero, for sure, and we’re working on it.” 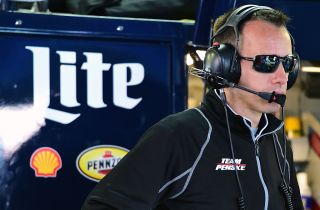 Paul Wolfe, crew chief for Brad Keselowski, has watched his driver slip from third in the Cup standings to eighth in the last eight races. During that stretch, Keselowski has finished 30th or worse (crashes) four times, and had just two top fives.

“We’re not in the best spot we’d like to be in,” Wolfe admitted Thursday on SiriusXM NASCAR Radio. “Seems like the last couple months have definitely been a challenge and a little bit of a struggle for all of us at Team Penske, not just the No. 2 car.

“We’re really just trying to find out what to do to get some speed back in our cars. It seems like where we get the cars driving and the drivers are somewhat happy with what we call a raceable balance, we’re just off on speed at that point. We can get the cars to run a fast lap time, but the drivers say they’re just not drivable and can’t race that way. It’s been a challenge trying to get both right now, and for whatever reason, we seem to be off.”

Time is not a luxury Wolfe or anyone else at Team Penske has. Seven races remain until the playoffs.

“We’ve got our work cut out for us,” Wolfe said. “There’s not too many races here until Chicago comes around, so we’re trying to figure it out, that’s for sure.”

Wolfe’s Team Penske counterpart, Todd Gordon, faces an even greater sense of urgency with the No. 22 of Joey Logano. Even though Logano won at Richmond earlier this season, the victory doesn’t count toward playoff eligibility because his car failed inspection after the race. 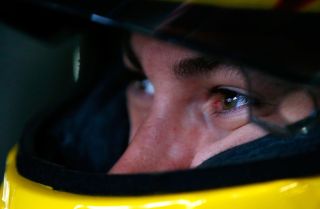 As a result, Logano is not locked into the playoffs and is in a seemingly must-win situation to secure a playoff berth. Things have gone from bad to worse of late: since his encumbered win at Richmond, Logano has finished between 21st and 37th seven times, with just one top-five and one other top-10 (plus a 12th-place finish) in the other three events.

Logano has fallen from fifth to 13th in the NASCAR Cup standings.

Wolfe can empathize with the plight of Logano and Gordon.

“We’ve got our work cut out for us, but this sport over the years, there’s peaks and valleys,” Wolfe said. “We’re been on the good side and bad side before.

“We’re going to have confidence everyone at Team Penske and Ford will continue to work in the right direction and hopefully get our speed where we need it to contend for a championship later this year.”

A tale of two seasons in just 19 races

Ford also won at Martinsville, Richmond and Talladega – and earned three more wins in the last six races, but those came on a road course (Sonoma), a restrictor-plate track (Daytona) and a triangle that is seemingly part superspeedway and part road course (Pocono).

Ricky Stenhouse Jr. has two wins (Talladega and Daytona), as does Keselowski (Atlanta and Martinsville), while Kurt Busch (Daytona 500), Joey Logano (Richmond), Ryan Blaney (Pocono) and Harvick (Sonoma) all have one win each. 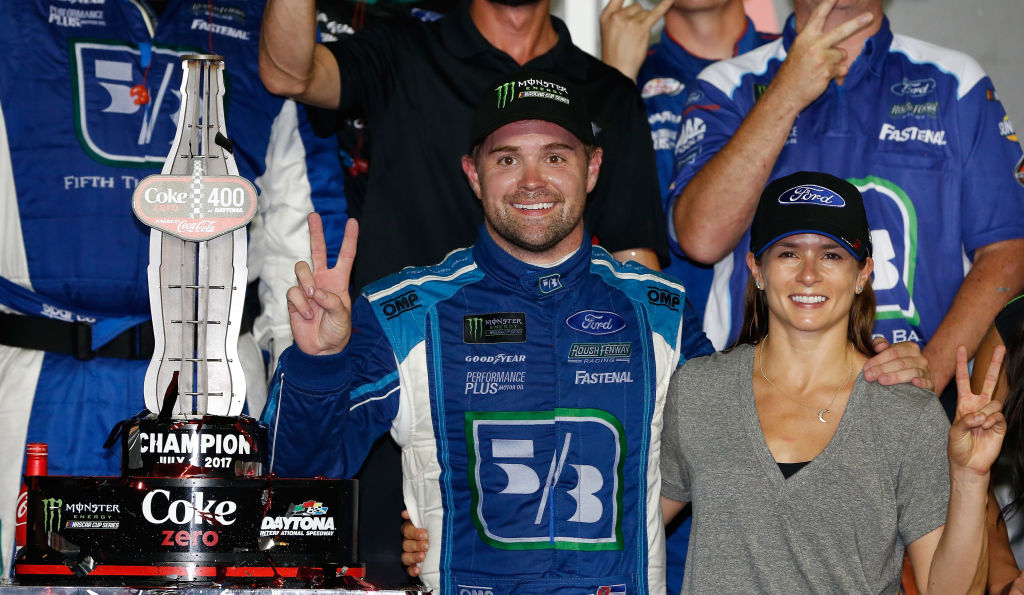 But check out some of the other recent Ford stats:

* At Michigan, in its corporate backyard, Ford had one car in the top five and led just two of the 200 laps.

* At Kentucky, Ford had no cars in the top five and led just seven laps.

* At New Hampshire last weekend, Ford had one car in the top five and led zero laps.

How did things fall off so quickly for Ford when it came to downforce and lack of speed? Wolfe has a theory.

“As the season went on, NASCAR started changing enforcement of some templates and some aero things, and for whatever reason, it seems like it affected the Fords maybe more than Toyota,” Wolfe said on SiriusXM NASCAR Radio. “Obviously, Toyota came out with a new car, they were slow getting going, but they definitely have it figured out and seem to have a little bit of an advantage right now.

“I feel like some of the rule changes on the aero side has really affected our cars a lot and trying to get them balanced out, back to where they were before some of those changes has been difficult for us.”

When Wolfe thinks he is starting to get a handle on things, other questions arise he told “The Morning Drive.”

“Is it more of a mechanical area that we’re missing with this package because of the aero shift?” Wolfe said. “Or the amount of downforce it is, is there something we’re missing mechanically with the platform of how we control our splitter or ride heights?

“Or is it just the fact those guys just have more downforce than us? Those are all the question marks and we don’t really have the answers right now. Maybe we can get out of our comfort zone and mindset of what has had success in the past and explore new things. We’ll continue to do that and pay attention to teams that are having success.”

Wolfe’s counterpart at Stewart-Haas Racing, Rodney Childers, crew chief for Kevin Harvick, admitted to “Tradin’ Paint” on Thursday that his team is pretty much in the same boat as Team Penske.

“I hate to even say it but I agree with (Wolfe),” Childers said on SiriusXM NASCAR Radio. “On one side of me, I feel that we’re in trouble. I don’t know if we will get caught up to where we need to be.

“I feel l like it’s time that Ford is going to have to push hard and come up with a new body and do something to get us back in the ballgame from the downforce side of things.” 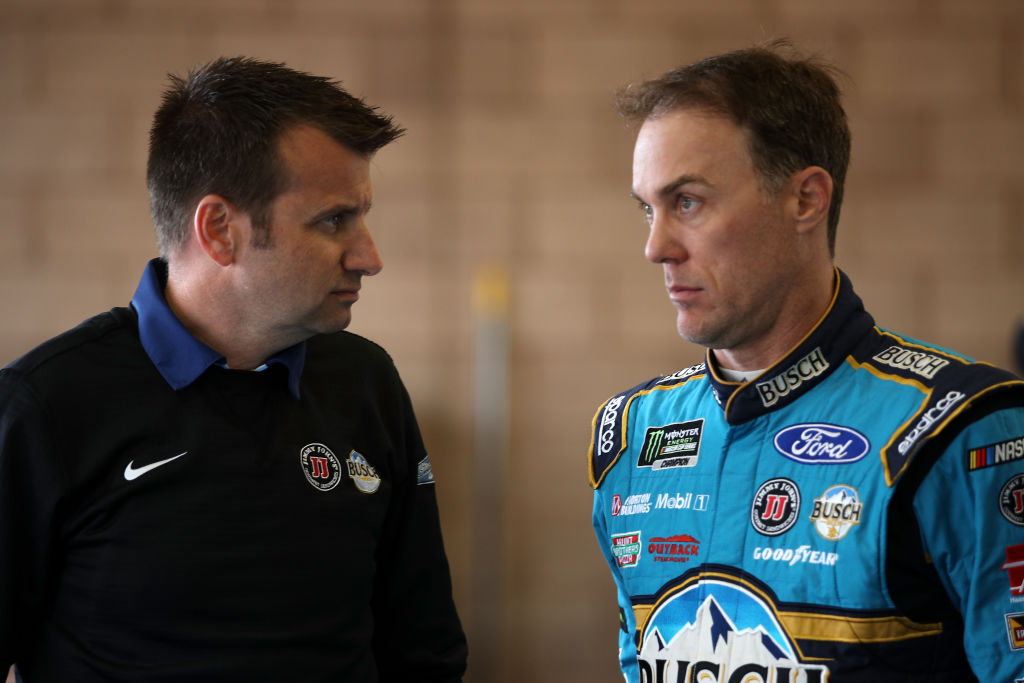 Childers would like to see NASCAR get more involved in the disparity he believes has developed between Ford, Toyota and Chevrolet.

“I think it’s time for NASCAR to take all the cars to the wind tunnel again and figure out where we’re all at,” Childers said. “If there are people that are way off, other teams, then we need to figure out how to make it more equal. You hate to get into that again.”

Even so, Childers remains confident in his team, given that Harvick is the highest-ranked Ford driver (fourth) in the Cup standings.

“The downforce stuff, we’re not way off,” he said. “I feel like we’ve kind of had the best Ford week after week here lately. We’re pushing hard and we’re not going to give up by any means and I think everybody will see that in our performance.

“But on the other hand I do feel like it has hurt us a little bit more and we just have to figure out how to dig through it.”

Ups and downs are cyclical

Childers also mentioned the irony that it wasn’t all that long ago that SHR and Harvick were being looked upon as the kings of performance (albeit in Chevrolets), much like Truex and Larson are today.

“I look back at the 2014 and 2015 seasons and everybody used to complain about us being the fastest car every week, leading all those laps and always have a shot at winning,” Childers said. “Looking back, I don’t even know if we understood then exactly what we were doing to be that much faster than everybody else.

“I think it’s the same way with (Truex and Larson) right now. They’ve done a good job, have their cars where they need them to be, their drivers are doing excellent jobs, the pit crews are doing a good job.”

But there’s still the bottom line.

“We have to get faster race cars,” Childers said. “Our pit crews have done excellent, Kevin’s done excellent, we just have to be faster when we unload off the haulers. Hopefully, we can get caught up a little bit.”